"The push factors can be negative conditions such as poverty, despair, lack of education and having nothing better to do," says Dr. Hilly Moodrick-Even Khen. 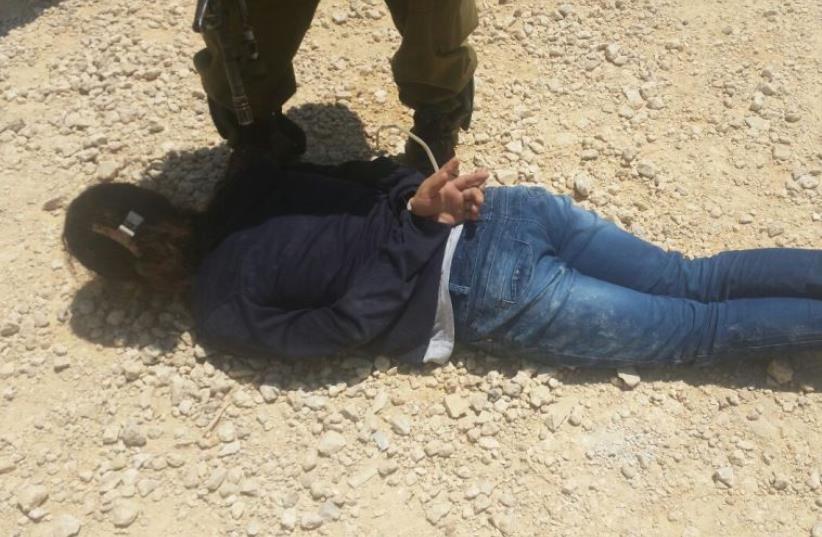 Female Palestinian terrorist arrested after stabbing soldier
(photo credit: Courtesy)
Advertisement
The justice system should invest more in education and rehabilitating teenagers who carry out terrorist attacks, and the offenders often should be exempt from criminal culpability, according to an expert on child combatants.“In the judicial system, there should be more initiatives for rehabilitation and more consideration of what has driven the children to do what they did when it gets to trial,” Dr. Hilly Moodrick-Even Khen, a senior lecturer at Sha’arei Mishpat College, told The Jerusalem Post last week.The author of Terrorism and International Law: Combatants and Civilians in Modern Battlefields, Moodrick-Even Khen who also has contributed chapters to other books on child terrorists, made her comments just days after two 13-year-old Arab girls from the Jawarish neighborhood of Ramle stabbed a local teen in an alleged terrorist attack.While the factors on the ground in Israel are different than those in other conflicts, Moodrick-Even Khen said that, like elsewhere, juvenile violent offenders can be driven by a mixture of “push and pull” factors.“The push factors can be negative conditions such as poverty, despair, lack of education and having nothing better to do. The pull can be factors that seem positive to children, such as a desire to imitate their adult relatives and the adults that for them represent heroic figures. Also they’re given a cause and something to live and fight for,” she told the Post.In other conflicts, particularly in Africa, there is a strong material incentive, in that child combatants know they will be provided with food and shelter if they become fighters. Here, she said, while it may be there is more of a tendency for Palestinian children from poor families to commit acts of violence, the factors are much different.“I think here it is more about incitement and despair and less about helping their families because these acts [of terrorism] are individual initiatives and the children are not recruited or supported directly by terrorist organizations.”Regarding the specific case of the two girls from Jawarish – a neighborhood known for its poverty and high crime – she said it was “a combination of poverty and despair and, of course, identifying with their Arab community also maybe in the territories. Even though they aren’t officially part of the PA, they have feelings of sympathy and support.”Moodrick-Even Khen, who also has researched the proceedings of the IDF military court for juveniles, said one of the glaring differences she discovered in her research between those courts and the ones within Israel proper is the lack of rehabilitation options for minors prosecuted in the court system in the territories.She said there is a lack of cooperation with the Palestinian authorities on the issue of rehabilitation, as well as a lack of rehabilitation facilities, meaning that many of the trials end with plea bargains so minors who could potentially reenter normal society are instead sent to prison.Regardless, with all the talk of security measures to deal with the stabbing attacks – from greater police reinforcements to shoot-to-kill directives for police and security personnel, Moodrick-Even Khen said what Israel needs is a greater investment in prevention and education of potential offenders.“Things should be looked at from the angle of prevention. The Israeli authorities should ensure better conditions for the children and families, to expose them to more education that doesn’t contain incitement and also to create for them positive opportunities so they don’t turn to these actions.”Prior to the founding of the IDF military court for juveniles in 2009, Palestinian offenders who were minors were tried as adults by the IDF system.