In the past, it has claimed some success in tampering with websites belonging to Yad Vashem, the Prime Minister’s Office, the Israel Defense Forces, the Knesset and the court system. 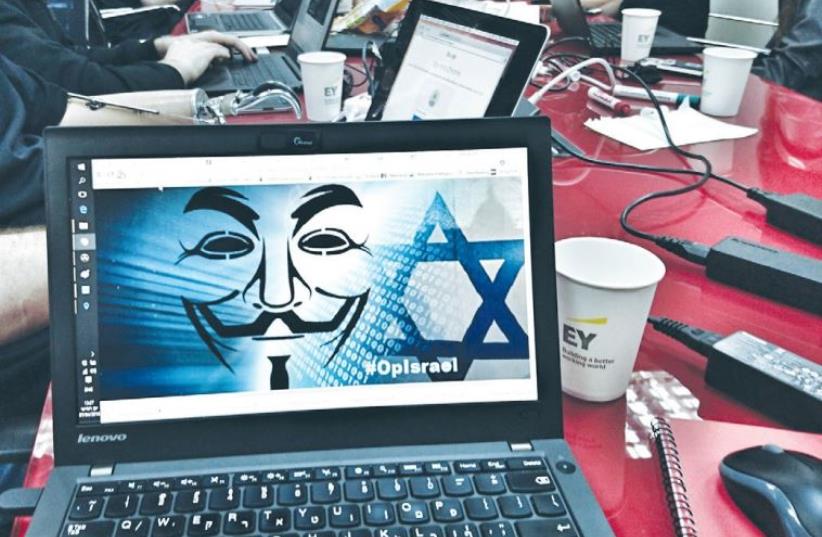 THE CERT-IL GROUP of volunteers responds to cyber-attacks in its Tel Aviv control room yesterday.
(photo credit: Courtesy)
Advertisement
Private Israeli websites faced a number of largely unsophisticated cyber-attacks on Thursday, following an annual call by the Anonymous hacking network to target Israeli sites on April 7.Responding to the attacks, expert cyber protection volunteers gathered in a control center in the Tel Aviv office of the Ernst & Young professional services company.The volunteers, who formed the CERT -IL group to monitor and respond to the attacks, reported seeing simple incidents, such as distributed denial of service attack on a bank’s website, which recovered quickly, and database thefts, including of one containing old credit card numbers.“They want to create a panic,” said Gadi Evron, CEO and co-founder of Cymmetria, and head of the IL-CERT volunteer group. “Every year, we set up a coordination and IT security center. This is our third year here, and we get together when Anonymous attacks. We form a cyber intelligence picture, and respond to the attacks. Our members include start-up personnel and people from academia. Our goal is to coordinate, educate, and provide cyber-security,” he said.“Once a year, Anonymous says, ‘This is the day we will attack Israel.’ Usually, these attacks are not very sophisticated. But once in a while, we see more sophisticated attacks,” Evron added.The volunteers send information to other organizations “that need it,” he said. “We saw defacement attacks, too, in which hackers planted flags on sites.”The control center received reports from hundreds of thousands of Facebook users in real-time, Evron said. “They helped us to monitor events, and to separate real attacks from claims by attackers.”A security source familiar with cyber security arrangements said attacks such as those seen on Thursday tend to target unprotected websites, not sites linked to critical national infrastructure.“We raised our awareness and readiness a little higher today. But most of the incidents you see today are not linked to infrastructure sites,” the source said. “We passed on instructions to others, and we cooperate with the National Cyber Bureau [to assist unprotected sites],” he added.Anonymous started its attacks against Israel in 2013, and has renewed them each year on April 7.In the past, it has claimed some success in tampering with websites belong to the Yad Vashem Holocaust Museum, the Prime Minister’s Office, the Israel Defense Forces, the Knesset and the court system.Niv Elis contributed to this report.