"Gush Etzion is here to embrace you and to hold you up whenever you need," friend tells parents of slain teen.

By TOVAH LAZAROFF
DECEMBER 28, 2015 03:30
Ezra Schwartz
Advertisement
Cars whizzed by Ruth Schwartz as she stood on a balmy December evening near the spot where her oldest son, Ezra, was killed in a terrorist attack on November 19.She had traveled with her husband and four children from their small Boston suburb of Sharon to the Gush Etzion junction, so she could walk in her 18-year-old son’s footsteps on the last day of his life and see for herself where he had spent the first months of his gap year between high school and university.“I just knew that I needed to come to Israel,” Schwartz told The Jerusalem Post on Sunday by telephone, just after visiting the junction where a Palestinian gunman had shot at cars stuck in a traffic jam killing Ezra, Israeli educator Yaakov Don, 49, and a young Palestinian man from Hebron, Shadi Arafa.“I walked up the street. I looked at the mosaic that was put up there. It felt peaceful there. It did not feel that he had been in a place that was unsafe.“He was in a van, with his school and yeshiva friends and he was traveling in an area that I would have taken him to,” Schwartz said.“If he had asked me, ‘could I go?’ I would have said, ‘yes.’ I would not have thought to say ‘no,’” she said, explaining that her older daughter, Mollie, had visited Gush Etzion when she was in Israel the previous year.“I just felt sad that he is not with us, and I was not here with him when it happened.”On that day, Ezra, who was studying at the Ashreinu yeshiva in Beit Shemesh, had initially thought to bow out of his weekly trip to Gush Etzion where he volunteered at a conservation park called Oz Ve’Gaon. It was built by Nadia Matar from Women in Green in memory of the three teenagers who had been kidnapped and killed by Hamas in June 2014. 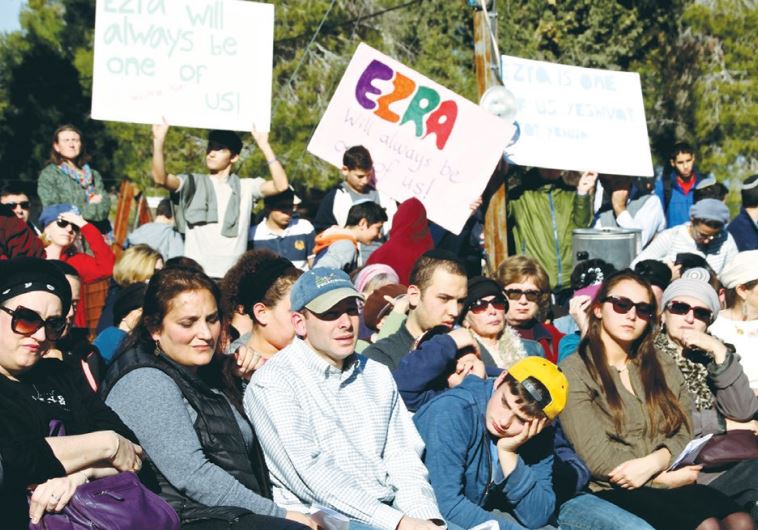 On Sunday afternoon, the Schwartz family visited the park and helped finish a path that leads to a play area named in memory of Ezra by pouring the last buckets of small white rocks onto the dirt.They also spoke at a small outdoor ceremony, in which Schwartz recalled how connected her son had been to the story of the three kidnapped boys; Gil-Ad Shaer, 16, Naftali Fraenkel, 16, and Eyal Yifrah, 19.On the day of their kidnapping, Ezra had run into their kitchen to tell his mother about it.“Ezra was the type of kid that internalized events like this. He was truly worried. Each day he would wonder out loud about them.“ Later in June, Ezra came to Israel for a summer program with his camp. Each time I spoke to him, he mentioned what was going on in Israel with the search for the boys.“He wondered if they could possibly still be alive. On June 30, he called me and said, ‘they were found, it’s so sad and really hard to think about,’” recalled Schwartz.Her son, she said, was a “happy, mischievous, funny, friendly and silly. He loved talking to people and learning new things. Ezra enjoyed nature and loved sports.”But it was also important to him to spend time on volunteer projects, such as cancer awareness, coaching basketball to underprivileged children and Oz Ve’Gaon, she said.Since his death, Schwartz said, “I have been trying to make sense of this tragedy. I have decided there is no way to make sense of it. It doesn’t help me to think about a larger meaning for Ezra’s killing.It doesn’t help me to think ‘what ifs’ or why him? Ezra was targeted because he was Jewish – by an evil person, a terrorist – same as Gil-Ad, Naftali and Eyal. If this terrible tragedy had to happen, I am comforted by the fact that he now has a further connection to Gil-Ad, Naftali and Eyal,” she said.Naftali’s mother, Rachelle, who was also at the ceremony, said the “raw pain” from the deaths left her “speechless.”She said she had first come to Oz Ve’Gaon 35 days after her son’s death in July because she sought a place to celebrate what would have been his birthday and found that it had a special energy.“We are about life, about reliving after crisis... We are about finding a way to separate the memory from the pain, to keep our sons’ memory alive and vivid and not to feel the stabbing pain every time you think of them, and of having these lives make a difference,” Fraenkel said.“It is a very honorable club you join now, the history of people who were murdered because they were Jews.”When she stopped talking she walked over to Schwartz and hugged her.Schwartz’s friend Rocky Brody, along with Matar from Women in Green and Gush Etzion Regional Council head Davidi Perl, organized the ceremony.Brody spoke of how she had been in the car with her sons heading out of the Alon Shvut settlement on that fateful night, when she heard the gunshots that killed Ezra.“At that exact moment there was no way for me to know that I had just lost a neighbor and a teacher of my children [Yaakov Don] as well as my close friend’s son,” she said.Now she has come to believe that she was placed by God in Alon Shvut so she could comfort her friends of two decades.To the Schwartz family she said, “Gush Etzion is like one big family. And from our family to yours, our arms are always open wide to embrace you and to hold you up whenever you need because we are always here for you.”Ezra’s father, Ari, said his Israeli cousins have feared their family would not have enough support in the aftermath of Ezra’s death. They live in the US and were not surrounded by a culture, like the one in Israel, that knew how to handle such a tragedy.“I can assure you, that we have not, for one second, felt alone. Not only do we feel that the entire nation of Israel is behind us and supporting us, but [we feel] our town, our state, our country [is] behind us. All the Jews across the United States have been unbelievable, and our friends have been incredible.”He recalled how when they landed in Israel on Thursday they were greeted by theirs and Ezra’s friends at the airport.“People were singing for us at the airport,” Ari said.“Seeing all of you here we feel such a tremendous amount of support. It doesn’t change how we feel. We just miss him so badly,” said Ari breaking briefly into tears.“But this does make it better and you should all know that and I thank you very much for that.”