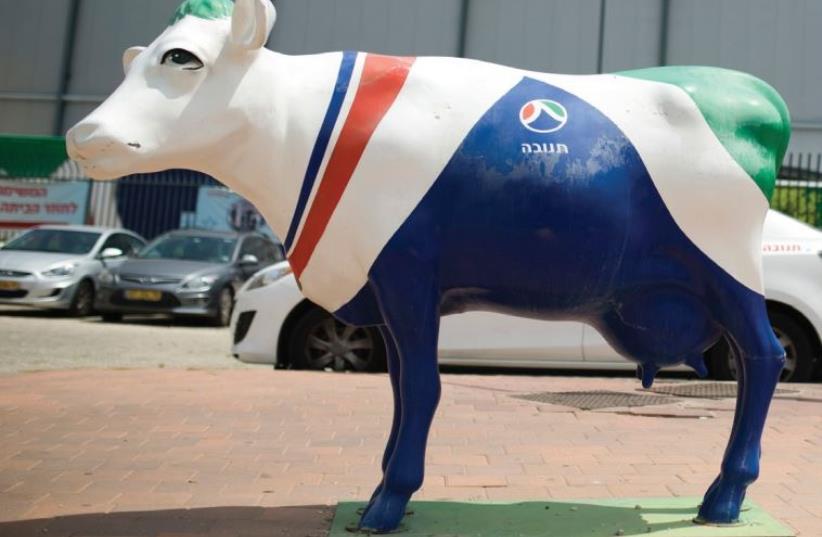 A statue of a beautiful cow painted in the colors of dairy firm Tnuva’s logo stands outside the company’s logistic center in Kiryat Malachi
(photo credit: REUTERS)
Advertisement
The Farmers Federation lashed out on Monday against Finance Ministry plans to encourage food imports by lowering import tariffs. On Sunday Finance Minister Moshe Kahlon vowed to reduce the cost of food in Israel by taking steps in the coming days to loosen import restrictions.Israel has a relatively high level of tariffs and other barriers to importing food relative to most OECD countries, he said, and steps to increase competition in the food market would lower prices.According to Globes, the Finance and Agriculture ministries are planning to eliminate production quotas for eggs and dairy products, and to eliminate planning in the poultry sector. As part of this reform, the ministries are also planning to discontinue the activity of the production and marketing boards under the law, headed by the Israel Dairy Board, the Eggs and Poultry Board, and the Plants Production and Marketing Board. These measures are part of an overall plan to lower the cost of living.In return, the government would compensate the farmers directly, similar to the subsidy given to farmers in Europe. The farmers will undertake not to reduce their current volume of production.The ministries are thereby seeking to lower the price of raw milk to the average price in the OECD countries. In contrast to past policy, in which these sectors were planned in order to ensure a regular supply of merchandise in the market on the one hand, and to prevent market saturation on the other, Kahlon and Agriculture Minister Uri Ariel want an open and free market in order to increase competition and lower prices.Federation president Dubi Amitai accused the ministry of ignoring reality. “The Finance Ministry is afraid to deal with the real problem,” said Amitai, who added that a real solution would “hurt tycoons.”"“They are shutting up the public with useless reforms that do nothing to lower the cost of living,” he said. He added that when the market was opened up to more foreign products in the past, the products have brought with them viruses and illnesses.In the past two months, for example, there have been a number of recalls by the Health and Agriculture ministries on batches of eggs imported from Spain and Ukraine after strains of salmonella were detected.Amitai said that while the serious “coupon clippers” celebrate lowered prices, consumers and farmers alike still aren’t able to make ends meet.Regarding plans to lower the prices of standard food items – such as dairy, eggs and possibly some produce as well – Amitai said that they have failed to provide a real solution to farmers. Kahlon said Sunday he would address ways to compensate farmers, though he did not specify whether that meant increasing subsidies, introducing broader agricultural reforms, or another approach.“We are surprised each day anew by proposed reforms and laws that would put an end to the field of agriculture,” Amitai said."He called on fellow agrarians to join his cause so that they can “earn a decent living while also providing fair prices to consumers.”Niv Elis and Globes contributed to this report.