Farmers give Rivlin baskets of produce for Shavuot

President offers to be the mouthpiece for Israel Vegetable Growers Association. 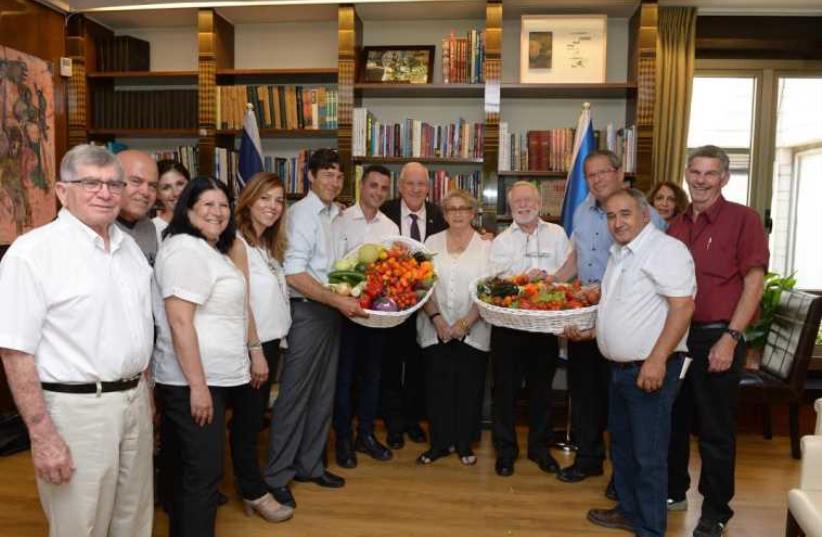 Rivlin and his wife receive produce from farmers
(photo credit: MARK NAYMAN)
Advertisement
As a Member of Knesset President Reuven Rivlin was for twenty years part of the lobby that argued for better subsidies for farmersSince assuming his present role, he has continued to run interference on their behalf and has interceded with the Ministries of Finance and Agriculture.Familiar with the problems which confront the farmers Rivlin offered on Thursday, to be their mouthpiece yet again.Rivlin has a special interest in their well-being, not only because he regards agriculture as a traditional Jewish value, but because his wife Nechama is a product of the moshav movement. In fact she sat in on his meeting with the farmers who brought Rivlin two big baskets of fruit and vegetables as is customary on the eve of the festival of Shavuot, which is a harvest festival..Secretary General of the Israel Vegetable Growers Association Meir Yifrah of Moshav Ohad in the southern region’s Hevel Eshkol area near the Gaza border,  said that in ancient times the first fruits were brought to the Temple and in contemporary Israel they are brought to the President of the State. He was accompanied by growers from the extreme south to the extreme north of the country.There were fewer varieties of fruits and vegetables than in most previous years, due to the fact that this is a shmita year in which many fields lie fallow.The farmers complained to Rivlin that because there is so little profitability these days in agriculture, most of the next generation have opted not to follow in the footsteps of their parents. In essence this means that Israel’s agriculture industry is in danger of dying out. What makes the farmers angry is that many of the fruits and vegetables that they have developed or improved on have been emulated by Mexico which is still trying to discover the secret of Israel’s prickly pears (sabras) which are considered to be the juiciest and tastiest in the world.What caught Rivlin’s eye in the baskets were the different species of eggplant and peppers. He is particularly partial to both.