"All pertinent bilateral issues were reviewed, and especially cooperation in areas such as energy, economy, culture and tourism." 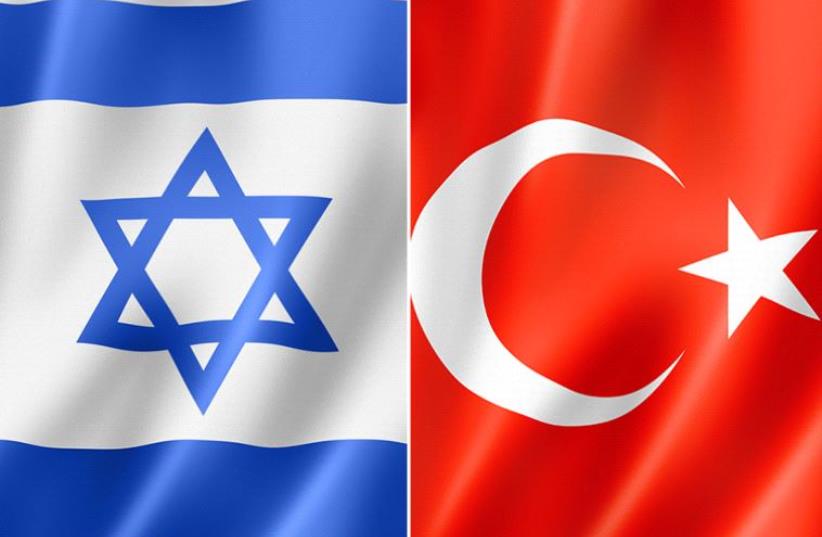 Israel and Turkey flags
(photo credit: ING IMAGE/ASAP)
Advertisement
Israel and Turkey held their first high level political consultation in six years this week, issuing a joint communique reaffirming “the importance of better Turkish-Israeli relations for the stability and the security of the region.”Foreign Ministry director-general Yuval Rotem returned to Israel from Turkey on Thursday, following the meeting the day before.The discussions, made possible by the reconciliation agreement between the two states that culminated in December with an exchange of ambassadors, surveyed all the issues between the countries – economic, cultural and security – with an eye at charting a plan for moving forward.“All pertinent bilateral issues were reviewed, and especially cooperation in areas such as energy, economy, culture and tourism,” the communique read.Ankara’s delegation to the talks was led by Rotem’s counterpart in the Turkish Foreign Ministry, Umit Yalcin.Both sides agreed to enhance cooperation through exchanges of ministerial visits, and of business, academic and cultural delegations. A high level delegation is to arrive next week for discussions on natural gas, the third round of such talks aimed at eventually exporting Israeli natural gas to Turkey. A visit of the Turkish minister of culture and tourism is also in the works.Rotem, in addition to the consultations with the Turkish Foreign Ministry in Ankara, also went to Istanbul where he met the governor of the metropolis and members of its Jewish community.A Foreign Ministry statement said that this dialogue sends a positive message from both sides of a commitment to deepening the relationship between the two countries.The discussions, coming after six years of challenges and boycotts, made possible a discussion on the deep changes that have happened in the interim in the region, the statement read.Israeli-Turkish ties nosedived in May 2010, following the Mavi Marmara incident in which Israel Navy commandos killed nine Turks trying to break the blockade of Gaza. Turkey immediately recalled its ambassador, and expelled Israel’s a year later. The two countries finally reached a reconciliation agreement last summer.This dialogue followed by two weeks a meeting in Brussels between Turkey’s Chief of Staff Gen. Hulusi Akar and IDF Deputy Chief of Staff Maj.-Gen. Yair Golan on the sidelines of a meeting of NATO leaders. That was the first high-level meeting between senior security officials from the two countries since the Mavi Marmara incident.