Noa Bauer recounts the great moment in Rio in which she saw her friend Yarden Gerbi win a bronze medal for Israel. 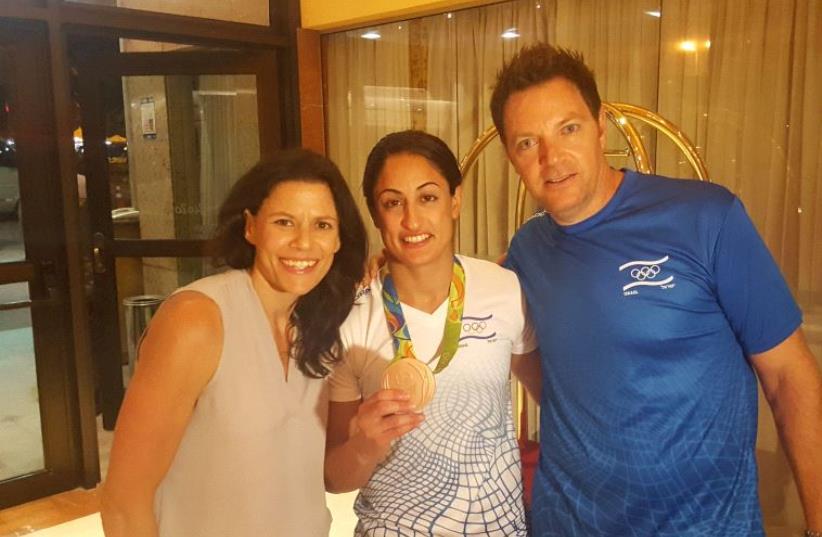 Noa Bauer with Yarden Gerbi
(photo credit: Courtesy)
Advertisement
I was not sure whether or not I should go to Rio. I've been to the Olympics before. As an excited 14-year-old girl I saw Yael Arad in her last Olympic games in Atlanta. At the time I was already a young judoka who dreamed at night of being just like her. I saw Arik Ze'evi, who I worked out next to for years, finish fifth in Sydney and four years later win a bronze medal in Athens. I saw him in Beijing and London as well. There were rises and falls, tears of joy, and sometimes sadness, great excitement and great disappointments.Despite all this, I still wasn't sure if I should go to Rio. Why? The cost, the distance, being away from home, I was busy at work, as well as external fears, like terrorism and Zika. Why take unnecessary risks when I could just watch the games from the comfort of my couch at home.Days before the opening ceremonies I bought a plane ticket. I couldn't resist the temptation. I had a feeling that we would get a medal in judo.Oren Smadja and Shani Hershko put together a dream team, the likes of which had not been seen in any previous Olympic campaign. Seven athletes, four of whom had medaled in European and world championships. In our jargon, we call these certified athletes. The talented Sagi Muki gave his heart and soul on the mat. The only Israeli judoka in history who made the Olympic semi-finals other than Arad. He so wanted to end it differently, but a serious injury kept him from the desired medal. Statistically, some will always be injured during training, but Sagi fought like a lion. The whole country was behind him, wanting it as badly as he did. At the end of the day, he finished a respectable fifth.And then, 24 hours later, Yarden's turn came - the most amazing female Israeli athlete that we've seen in recent years. A "money-time" athlete. I saw her grow up. From a young age, it was clear that she was something special. The talent of a generation. So talented, intelligent modest and quiet, but with a halo around her head. Yarden is a workhorse, focused on her goals and, most importantly, someone who dreams big and achieves.When the day of her matches began and the first round had passed, it was clear that she was among the favorites for a medal. However, as will happen in judo, things got a bit messed up during the match with the Brazilian opponent on her home turf. But I saw Yarden come off the mat. I did not see any anger or disappointment. I didn't see a single tear. I saw great perseverance. I saw daring. I saw her eyes say: "This match is behind me, it's over, but there's still a chance for a bronze medal. That medal is mine and today, nobody will take it away from me."I looked on from my seat in the crowd and smiled to myself. My heart warmed and filled with pride. It wasn't over and Yarden knew it. During the break, the whole amazing delegation came to encourage her. We could barely speak because we had all already lost our voices from non-stop cheering and all of us had butterflies in our stomachs. We went back to the arena with crazy energy. The first match ended in a victory for Yarden over the Chinese competitor. Then came the moment of truth. A great moment made for athletes cut from Yarden's cloth - the fight for the medal. The Olympic medal. Yarden's medal.Everything boiled down to one moment - this entire day, yesterday's training, last week's, the pressure of the entire last year, of all the recent years. Since Yarden began to succeed, that success brought with it pressure and the expectations of an entire country.
This battle required focus and non-stop preparedness. To stay locked and loaded just a little more. To be the best you can be for just four more minutes of the match. To compete against the excellent, quick and very dangerous Japanese opponent, who wants this medal no less than you do.She did it. She did it like a champion. Like Yarden. Because that medal was hers and she knew it from the moment she finished the quarterfinal match. Maybe she already knew it a week ago, or a year ago, or when she was still just a girl and got her yellow belt. She knew it and did everything it took to win.Yarden Gerby and Shani Hershko knew it all along and did it like champions. What luck that I didn't cancel my trip to Rio. What was I thinking? What happiness it was to be there at that moment and to see Yarden Gerbi's dream come true. You are simply a champion. Good luck to Ori Sasson, who competes on Friday, and to Israel's whole Olympic delegation.Noa Bauer, a former member of Israel's judo team is vice president of international marketing for Taglit-Birthright