Israel is operating the largest humanitarian presence in Nepal, with over 250 doctors and rescue personnel working around the clock to locate and treat an almost equal number of Israelis. 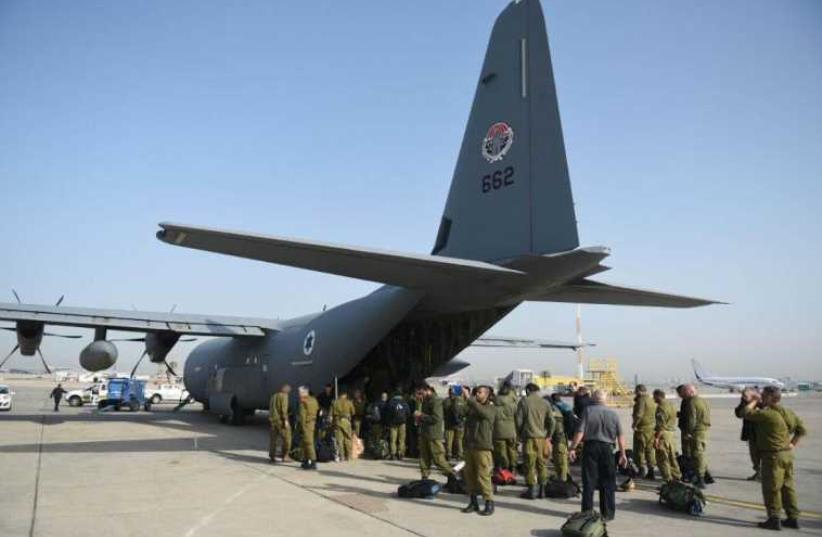 IDF rescue team heads to Nepal
(photo credit: IDF SPOKESPERSON'S UNIT)
Advertisement
A flight carrying personnel belonging to the IDF's Home Front Command returning from Nepal is scheduled to land at Ben Gurion airport on Sunday at approximately 2:30 p.m., according to an official IDF statement.Some thirty Israeli travelers will also be aboard the flight and will leave the airport through terminal three.Israeli rescue teams initially departed hours after an earthquake, ranking 7.9 on the Richter scale, struck the small Himalayan state of Nepal on April 25, setting off avalanches, causing widespread damage and killing, according to the latest figures, more than 7,000.The IDF's own teams, led by the Home Front Command, departed two days later, on April 27, with several aircraft  in tow carrying medical personnel, equipment and aid that would be used to erect a field hospital in the hours after their arrival in Nepal.In terms of manpower, Israel operated the largest humanitarian presence in Nepal, with over 250 doctors and rescue personnel working around the clock to locate, treat and ensure the safety of an almost equal number of Israelis (and others) that were unaccounted for at the outset of the disaster. Presently members of the Home Front Command and the Nepalese military are conducting searches for only one missing Israeli, 22 year-old Or Asraf, a former member of the Golani Brigade's elite Egoz Reconnaissance Unit who was last seen hiking in the Langtang area of Nepal.