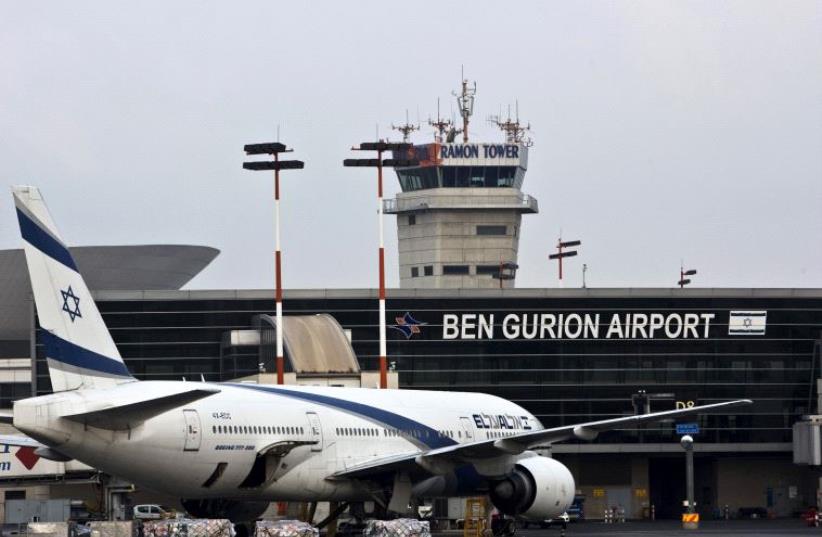 An EL AL Boeing 777 aircraft at Ben Gurion International Airport near Tel Aviv,
(photo credit: NIR ELIAS / REUTERS)
Advertisement
An English soccer club waiting to fly back home from Ben Gurion Airport was held up for nearly 24 hours following the funeral of former president Shimon Peres, UK-based Internet publication The Independent reported Friday. Following Southampton FC's football competition with Hapoel Beersheba Thursday evening, the team - nicknamed The Saints- were scheduled to fly back to Bournemouth Airport early Friday morning. But the club was considerably delayed due to a cavalcade of foreign dignitaries and heads of state who were departing from Israel after paying their respects to Peres at Mount Herzl cemetery in Jerusalem.The team was only allowed to leave after the procession of foreign officials and former leaders had departed, which included US President Barack Obama, Prince Charles, former UK prime ministers David Cameron and Tony Blair, and former US president Bill Clinton. In all, the Southampton team did not depart until 5 p.m. local time, and only arrived at Bournemouth 24 hours after their match with the Israeli soccer club.The game played between Beersheba and Southampton Thursday night ended in a 0-0 draw.