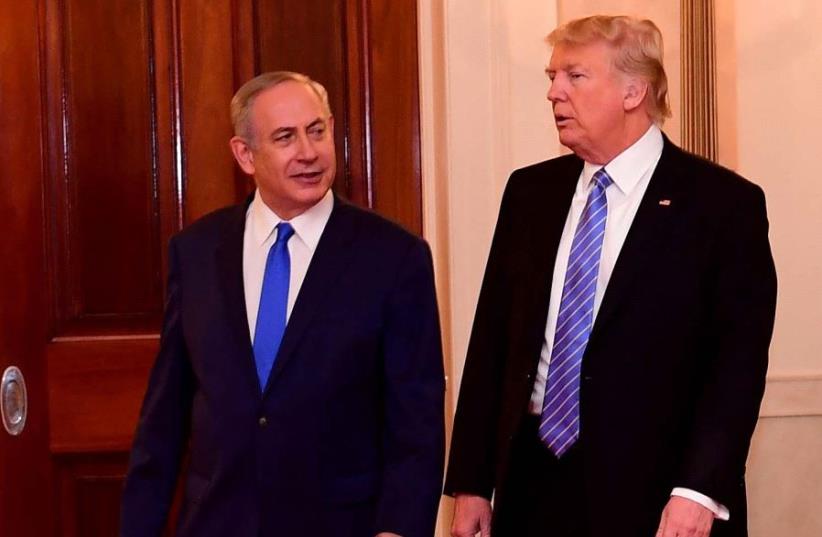 PM Netanyahu and President Trump
(photo credit: AVI OHAYON - GPO)
Advertisement
Foreign Ministry director-general Yuval Rotem and his counterparts at the Finance Ministry, Shai Babad, and the Prime Minister's Office Eli Groner  reached an agreement early Thursday morning over wage increases  for Foreign Ministry staff, who are threatening to disrupt the May 22 visit of US President Donald Trump.The workers had threatened on Wednesday to begin work sanctions on Thursday that could impair preparations for the high profile visit, and are now waiting for the deal to be implemented."We are sick of empty promises and charlatan administration over the last few years," said the Foreign Ministry's worker's union in a statement. "We will wait and see a signed document and moreover for the agreement to be implemented in practice." They added that the threats of disruption are still in place.The workers union had sent a letter to its staff in Jerusalem and 102 Israeli embassies and consulates around the world, instructing them that if progress is not made on implementing their wage agreement, they should not take steps involved in preparing for the visit.“Do not write position papers, do not participate in preparatory meetings, do not order anything from suppliers, do not issue authorizations, do not send relevant equipment, and not take any other step related to the visit,” the letter said.An agreement signed in 2014 promised a new wage model within six months. Not only did that not happen, the Treasury asked the workers to redistribute salaries internally without any raise at all from the state.The Foreign Ministry’s budget is NIS 1.5 billion, of which 95% is spent on the upkeep of the embassies, consulates and salaries.The ministry’s operating budget for activities around the world in only NIS 80 million.