This new crop of Jewish Agency emissaries is young, ambitious and looking for innovative ways to engage with the Jewish world. 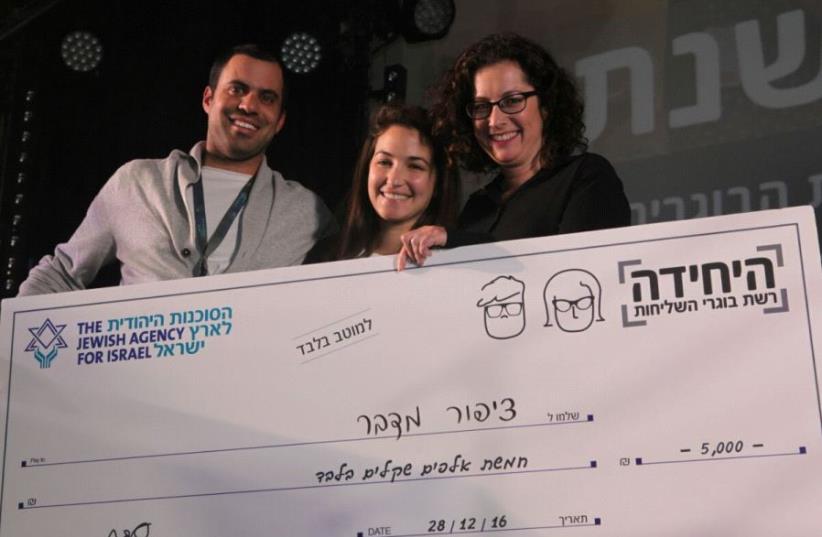 YAKIR DANIEL, Ella Bokzoba and Ayelet Barak Medina, head of the Returning Shlichim program, pose with a check provided by the Jewish Agency for its co-sponsored Tzipor Midbar program.
(photo credit: JEWISH AGENCY)
Advertisement
A Jewish Agency emissary used to fit a certain cookie-cutter mold, Jewish Agency director-general Alan Hoffmann tells The Jerusalem Post.Typically, they were established, middle- aged educators who came from a remote kibbutz, culled from a relatively small pool of candidates.In the past decade, under Hoffmann and Jewish Agency Chairman Natan Sharanksy’s leadership, the notion of what is a shaliach has changed dramatically.Today, they are typically in their late 20s, are unattached, hail from all over the country and a variety of backgrounds, and are eager to learn about the Jewish world and want the Jewish world to learn from them about Israel.“These are very talented people,” Hoffmann says of the 2,000 young Israelis who dedicate a summer, a year or more to serving the Jewish people through the Jewish Agency.“One of the things we have come to know is that as much as these fantastic young people are bringing Israel to the young people they meet, they are also undergoing a learning experience when it comes to the Diaspora Jewish community. Suddenly, they understand what it’s like to be a minority,” he explains.It is that understanding, acquired by going from a majority-Jewish country to live in one where Jews can be few and far between, which impels many emissaries to continue their engagement with the Jewish world when they return to Israel.Hoffmann encourages people to think of the shlichut experience as a cyclical one where the experience never quite ends. For example, through the myriad of shlichim programs the Jewish Agency offers, in one lifetime a person can become an emissary before the army, then again after the army by enrolling as agency emissary to one of the many summer camps across North America, then can serve on college campuses when they reach university age and finally, can continue to serve the Jewish World when they come back to Israel.The returning shlichim experience is a diverse one and there is no one way to continue a person’s commitment to connecting with the Diaspora.Ella Bokobza, for example, was an emissary in St. Louis, Missouri, and has just graduated from the Mandel Social Leadership MBA Program at Ben-Gurion University of the Negev in Beersheba. This is not to be confused with the Mandel Program for Leadership Excellence at the Jewish Agency, which focuses on the “selection, training, placement and advanced training of young shlichim serving throughout the Jewish world.”For Bokobza, who grew up in Beersheba, this translates into working for Tzipor Midbar (“Desert Bird”). The program offers a support mechanism for discharged lone soldiers (in Israel without close family that can help them), to make them feel like home despite the loneliness and bureaucracy that often bogs down their experiences in Israel.“While I was a shaliach I understood I want to be more active in the Jewish world while back in Israel,” said Bokobza, who also works for the Jewish Agency as a partnership coordinator who recruits emissaries from the periphery.She established Tzipor Midbar with Yakir Daniel a year ago, with funding from Natural Intelligence, a Tel Avivbased hi-tech company, and under the sponsorship of Boharim-Mahar, a Jewish Agency social activism program for students.“We found out that 50%-70% of olim hadashim [new immigrants] who were lone soldiers leave the country.Mostly because they are lonely, don’t feel connected enough to Israel and are annoyed by its bureaucracy,” she explains.“This community is the second family for them, a platform for personal and professional development,” said Daniel, who recently joined Viral Security Group as chief operating officer after being co-founder and vice president of sales at Cloud Startup for two years.For Daniel it was his emissary experience that helped shape him into the successful businessman he is today.“I learned a lot of from the shlichut experience. I served in the IDF for 10 years, and it was not equivalent to the real world experience I got as a shaliach. During my time at Hillel at George Mason University in Virginia, I had to reach out to new organizations, make connections and learn how to fund-raise,” he explains.Although the emissary program is popular, with more than 12,000 Israelis applying each year, the Jewish Agency is constantly searching for ways it can do more to support its young ambassadors of Israel.To that end, on November 29, the 70th anniversary of the UN resolution in favor of the partition of Palestine and the establishment of a Jewish state, the Jewish Agency will hold an festive dinner in New York where it will announce the launch of a training institute for its emissaries.“We constantly create an ever-growing universe of young committed Israelis,” Hoffmann says. “I want this to be a major piece of the identity of young Israelis.“I think there’s something that’s been lost as well,” Hoffmann laments after talking about his experience as an oleh coming from South Africa 50 years ago, when he volunteered during the Six Day War. “What we’re trying to do with the young Israelis is a return to the core principles that are at the heart of being part of a Zionist society.”While Hoffmann of course does not yearn for the days when Israel was in the midst of an existential crisis, he hopes to bring back into fashion the notion that Israel, Zionism and the Jewish people are worth a life-long commitment.

This article was written in cooperation with The Jewish Agency.
Advertisement
Subscribe for our daily newsletter