“The youth of the uprising wanted to make sure that when people thought of the Holocaust, they knew the Jewish people resisted when they had the chance.” 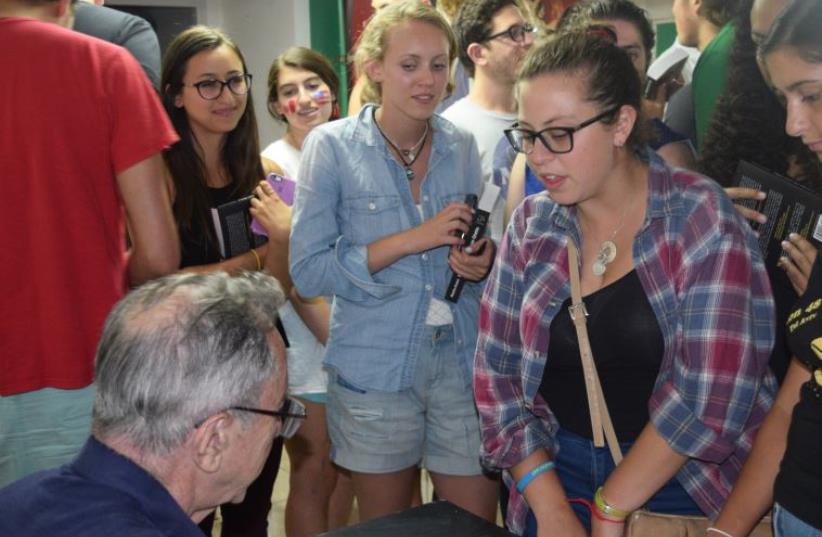 Moshe Arens signs copies of his book 'Flags over the Warsaw Ghetto' for students from Boston Onward Israel Monday night in Jerusalem.
(photo credit: Courtesy)
Advertisement
Former defense minister and Israeli ambassador to the US Moshe Arens spoke to some  50 students visiting Israel  from Boston area universities in Jerusalem Monday night.  Arens, the author of the  book, Flags over the Warsaw Ghetto: The Untold Story of the Warsaw Ghetto Uprising, led an engaging discussion of the 1943 Warsaw Ghetto uprising with the students and talked about the importance of the uprising in Jewish history.“The youth of the uprising wanted to make sure that when people thought of the Holocaust, they knew the Jewish people resisted when they had the chance,” said Arens. Nearly 13,000 Jews died during the uprising, during which they attempted to resist transport to Treblinka, their final destination. The students, participants in Boston Onward Israel, were all presented with copies of the book, which Arens signed.“I hope that my book was a modest contribution to finally getting the truth out,” he said. “It is now 73 years since the uprising, an event that became the symbol of Jewish existence.”“I was reminded that it is our mission to ensure that the entirety of the Holocaust is told, retold, and remembered,” said Adi Berkowitz, an Onward Israel student interning at VinciWorks in Jerusalem. “Moshe Arens took initiative about something he cared about and made sure that people will know the full story when he wrote his book.”Onward Boston is supported by The Lavine Family Leadership and Service Learning Fund at CJP, which is designed to help engage the next generation with Israel and Jewish life.