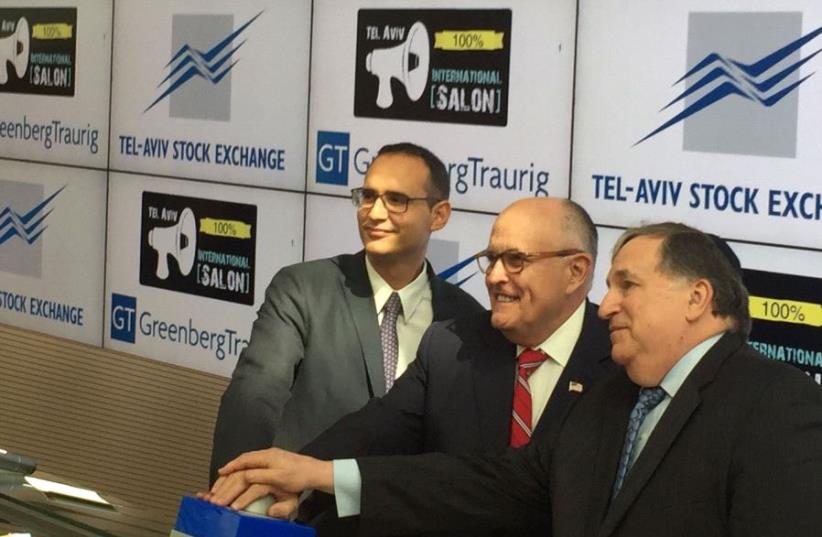 Rudy Giuliani (center) rings the opening bell at the Tel Aviv Stock Exchange, June 28 2017.
(photo credit: JULIA BAYER)
Advertisement
Former New York City Mayor Rudolph W. Giuliani praised Israel as "the most innovative country in the world" when he opened the Tel Aviv Stock Exchange on Wednesday morning.Giuliani was full of compliments for Israel's achievements, stating that one of the reasons he joined his law office, Greenberg Traurig LLP, is because they have an office in Israel. "Our law firm is one of the only international law firms with an office in Israel. We're open about it and proud to put it on our [business] cards," said the former New York mayor."I'm very proud to see that this country has become a capitalist, free country. The progress made is quite remarkable. This is one of the great economies in the world with close to unlimited potential," added Giuliani, highlighting the differences between Israel's modern economy and that of its early days.Although preferring to speak about economics rather than politics, the crowd that gathered at the Tel Aviv Stock Exchange pressed Giuliani on his thoughts about last year's US elections and the work of President Donald Trump.Giuliani described alleged Russian interference in US elections as "very worrying" but emphasized that there is no evidence that Russia actually succeeded to interfere in the vote count."Any important election needs a written backup. Any suggestion of a cyber interference can be checked," said Giuliani. In New York City, every digitally-submitted vote also has a written backup. "That's the only safe way to conduct a democratic election where another country may have an interest or just want to do it to you to make you look incompetent."On leaking secret conversations during the election campaign, Giuliani suggested that "maybe it is a risk of the modern world. It's all criminal and terrible. Newspapers try to get that information all the time." Giuliani, who was until recently touted for a senior Trump administration post, praised the US President's leadership in the fight against Islamic terrorism, comparing it to Reagan's aspirations to defeat Communism and announced that he will be joining the president in his upcoming visit to Poland."Trump will speak to all the countries on the Soviet border to assure them that the US is there to support them. All the Putin talk is nonsense, our commitment to NATO is an obligation by law.""In West Europe, [Trump] will explain to them: pay your bills. He's a good bill collector."Other topics discussed included how to raise leaders of the next generation, the efficient use of natural resources and developments in artificial intelligence technology.Former New York City Mayor Giuliani was speaking at an event organized by the Tel Aviv International Salon.