Rivlin: Judges a bridge between traditional values and those of the present era 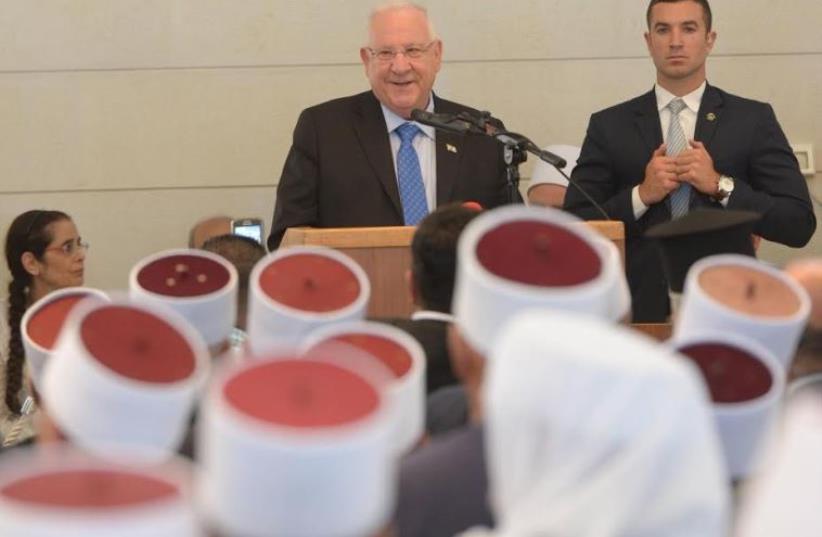 President Rivlin attends Druse festival of Ziyarat al-Nabi Shu'ayb at Jethro’s Tomb in northern Israel
(photo credit: Mark Neiman/GPO)
Advertisement
Wednesday was a festive day for the nation’s Druse community with the appointment of four kadis to the Druse courts.One of them, Antid Madi, who had previously served as a judge in the Acre Magistrate’s Court, said that this was the second time that he was taking the pledge to uphold the law and to deal fairly with all those who came to his court, but he was no less excited than he had been the first time, especially as he was making his pledge in the presence of President Reuven Rivlin, Justice Minister Ayelet Shaked and President of the Druse Court of Appeal Muawafaq Tarif, who only last year was appointed to his position, even though he had been unofficially serving in it for years.The other three appointees were Amad Abu Reish, who like Madi was appointed to the Druse Court of Appeal, and Nazem Sarhan and Ehsian Halabi, who were appointed to the Druse Religious Court.The four made their pledges first in Hebrew, then in Arabic.Like Orthodox Jewish males, religious Druse do not have physical contact with women other than their wives, and so each of the four shook hands with Rivlin and Tarif, but only bowed to Shaked, who with her hands folded in front of her, bowed back.Rivlin said that the covenant between the Jews and the Druse dates back to the time of Moses, whose father-in-law Jethro is considered to be the ancestor of all Druse, and whose sage advice consolidated Moses’s leadership position.Shaked went a step further and said that Jethro was responsible for the establishment of the first justice system for the Children of Israel, adding that she looked forward to the day when a Druse judge would be appointed to the Supreme Court.Her initial contact with the Druse community, she said, was 22 years ago when she was an IDF education officer on the Golan Heights. She met a Druse officer by the name of Hussein who had been ordered to get rid of terrorists in the area. Hussein was a stickler for making the soldiers under his command thoroughly familiar with the environment around them so that they would recognize any disturbance and would be alert.“What I learned from him remains with me to this day and serves me even as justice minister,” said Shaked. Wednesday’s appointments signified the completion of a process, she said, noting that the Druse courts were entitled to a full complement of judges.Rivlin said that the appointments provided an opportunity to reflect on the covenant of the past and the challenges of the future in which the kadis were a bridge between traditional values and those of the present era. In reminding the kadis of the heavy responsibility on their shoulders he urged them not only to judge fairly but to be sensitive and compassionate.Referencing the frequency with which judges are appointed to the civil courts, Tarif said that Wednesday’s ceremony was rare in its infrequency.One could barely count the number on the fingers of one hand, he said. He was grateful to both Rivlin and Shaked for taking a keen interest in the Druse community, and had particular praise for Shaked. Tarif had recently been in conversation with David Libai who served as justice minister from 1992 to 1996, who he said had only good things to say about Shaked despite their political differences.The Druse community in Israel numbers approximately 133,000 persons living in 22 villages in the Galilee, with the largest in the Mount Carmel area (on the Golan Heights there are four villages which came under Israeli jurisdiction after the Six Day War), according to data published by the Justice Ministry.There are three Druse Courts in Israel: • The Druse Court in Acre – established in 1963; • The Druse Court in Mas’ada on the Golan Heights – established in 1972; and • The Druse Court of Appeal in Acre – established in 1963.In the Druse villages there are 62 officials empowered to solemnize marriages, of whom there are them on the Golan Heights. These officials conduct marriage ceremonies after receipt of a permit from a Druse Religious Court.The Druse Courts, which since their foundation came under the Religious Affairs Ministry, were transferred to the authority of the Justice Ministry on January 28, 2001.