French-Israeli businessman to donate 20,000 pairs of free glasses to those in need 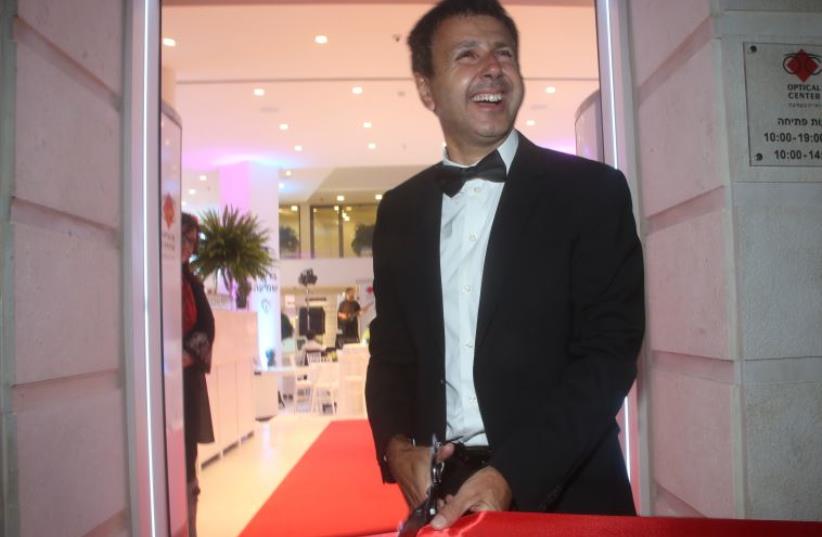 Optic Center founder and CEO Laurent Levy inaugurates his first store in the capital
(photo credit: MARC ISRAEL SELLEM/THE JERUSALEM POST)
Advertisement
In the face of a devastating economic downturn that has crippled many of Jerusalem’s shop owners, a French-Israeli businessman is bucking the terrorism-induced trend by opening the first of 70 planned eyeglass stores throughout Israel in the capital’s Zion Square.Laurent Levy, 49, CEO and founder of Optical Center, opened his first shop in Paris in 1991. Today he has 430 Optical Centers in France, Sweden, Luxembourg, Belgium and Spain.Ninety days ago, the celebrated entrepreneur, who lives in Jerusalem’s high-end Mamilla neighborhood with his wife and children, purchased the 750-square-meter flagship store, which formerly served as a Bank Leumi branch.Levy said he also intends to open 69 additional stores throughout the country over the next 10 years.At a festive event at the Zion Square flagship store last Thursday evening, attended by hundreds of guests and replete with a band, servers, wine stations and gourmet buffet, a tuxedoed Levy, who made aliya 10 years ago from Paris, spoke about why he decided to invest in Israel.“I have opened one new store every week for the last three years,” he said near a red carpet leading to the neon-lit, refurbished shop. “I opened this one because I want to bring something of quality to the city center; this is very important to me.”“There is a difference between the character of the people of Jerusalem and what they are being offered,” he added.Noting the ongoing violence in France, Levy brushed aside any concern over the lasting impact that the wave of terrorist attacks would have on his new store, or the dozens of others he plans to open in the coming days and years.“I think it is more dangerous to be in Paris today than to be in Jerusalem for Jews and non-Jews,” he said. “The [French] media doesn’t report it, but I can tell you that a lot of people are attacked every day in Paris and the rest of the country.”Asked what he would like to say to the people of Israel on the eve of opening his first store, Levy said: “I want them to have access to the lowest prices at the best quality. And the most popular brands in the world are here. They can come and buy from here.”Levy said he is also opening an Optical Center in the capital’s Talpiot neighborhood on Sunday and has invited 200 prospective investors to Thursday’s ribbon-cutting party.Moreover, through his Optical Center Foundation, Levy said he will donate 20,000 free pairs of quality glasses to impoverished Israelis across the nation.“Some people who have money can pay for quality, and I want those with less money to have the same choice,” he said.