From breaking up karaoke parties to hunting for a terrorist 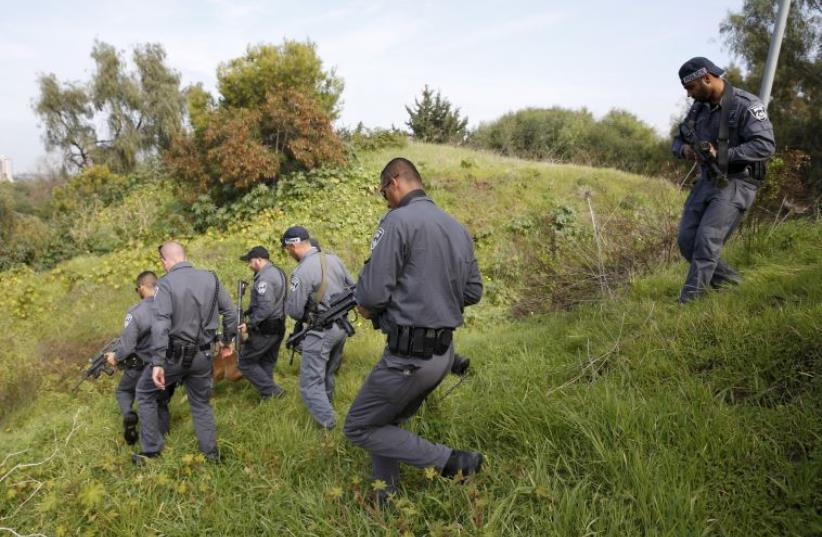 Israeli policemen search for suspect of Tel Aviv shooting attack
(photo credit: REUTERS)
Advertisement
It’s Day Five of the hunt for a fugitive terrorist suspect, and in south Tel Aviv, Ben Cohen is starting the latest in a series of long shifts patrolling the city where residents have recently been looking over their shoulder a little more than usual.As bad as breaking up karaoke parties can be, for the past few months, and especially since Friday, the city of Tel Aviv’s private security force, known as SELA (the Hebrew acronym for Siyur L’bitahon Ironi, or Municipal Security Patrol), has found itself cast in an entirely different role – as reinforcements for police facing a wave of terrorist attacks targeting Israeli civilians across the country.“It used to be we’d get calls about, you know, your neighbor who thinks she’s Beyonce and is singing karaoke all night, keeping your kids up. And now, we have to go from stuff like that to working anti-terrorism patrols. It creates a real dissonance,” says Cohen, deputy head of patrolling for the force.After a short spell working in the world of finance, Cohen, 36, decided to join SELA to give something back to the city, but also get out of the office and out on the street.The Golani Brigade veteran was one of six officers who put together its patrol unit, a fact he notes with pride.He’s been in Tel Aviv for years now, but grew up in Jerusalem and said he remembers well the suicide bombings of the 1990s and the second intifada.Ever since the “stabbing intifada” began in October, members of SELA have found themselves shifting from quality of life issues, such as noise complaints and responding to fights outside clubs, to patrolling for suspicious persons and collecting street-level intelligence to feed to police.“Just yesterday, we took 80 calls about suspicious people,” Cohen says, describing how the force is constantly responding to calls on their police radios, calls sent by the 100 dispatch center, or reports coming in from residents who stop them on the street.He adds that in the past few months, members of SELA have seized knives from a number of suspects – although these were young men fighting outside clubs, not terrorists carrying out attacks.In the meantime, with the lone wolf attacks continuing and with a massive manhunt underway for Nashat Milhem – suspected of murdering two Israelis in a shooting attack on Friday on Dizengoff Street – the officers are working an average of 15 extra hours per week.“What I’ve noticed since October,” Cohen says, “is the commitment of our teams to contribute and help out. Especially since Friday, you have people with families, children, and they’re out there focused entirely on catching the terrorist.”Founded a year ago by the city to deal with personal security issues of residents – particularly in south Tel Aviv – SELA consists of some 200 officers, paid for by municipal taxes.Upon announcing the program last November, City Hall said it would deal mainly with quality of life and public security issues – such as noise complaints, public drunkenness and the like – and that the officers would back up police out in the field.News of the program drew fears of possible abuses of power, in particular that people without the same training as police would be given similar firearms and powers.Like most of those on the SELA force, Cohen carries a sidearm on his hip, a Glock 17 pistol, ready for action. He and the others received a month and a half of firearms training, which began before the recent wave of terrorism.Some of the officers are allowed to carry out searches, in particular for weapons. They can’t legally arrest suspects, though they can detain them until police arrive. Cohen adds that he is prepared to use deadly force if need be.The private force goes out on patrols with uniformed police from the Tel Aviv District, and each morning and afternoon, SELA members sit with police during security assessments at stations in the city. They break up their shifts with static and roaming patrols – with officers posted in cruisers outside locations like the Carmel Market or Dizengoff Center, while others respond to calls and do foot patrols.Cohen says that in hunting for Milhem, it is police who have been going door to door, raiding construction sites and searching bomb shelters. For the most part, SELA officers have been standing guard outside daycare centers and schools in the morning and when the children go home. At night, when the club crowd takes to the streets, they deploy in areas with a high concentration of bars and other night spots.He says that over the weekend, the city seemed much quieter than usual, but that by Monday life appeared to have returned to normal, and that Tel Avivians had gone back to their routines in spite of the manhunt for the armed and dangerous fugitive.There was a bit of extra excitement on Tuesday morning, when officers from SELA were called in for a sudden security assessment with police. An Arab man from east Jerusalem had run a police checkpoint and escaped into Herzliya, where his car was found abandoned not long after.At the same moment, a group of Tel Aviv crime reporters was waiting to be taken on a ride-around with officers searching for Milhem, but the tour was canceled when reports came in of the new fugitive.“You guys,” one of the reporters asked a police commander outside the north Tel Aviv station, “are going to catch this one, right?” A few hours later, the man was in custody, and police and SELA members returned to their duties in a time of heightened tensions.