Israel’s special envoy to Palestinians under investigation in submarine probe

Molcho has been at Netanyahu’s side and in the thick of diplomatic activities with the Palestinians since Netanyahu took power for the first time in 1996. 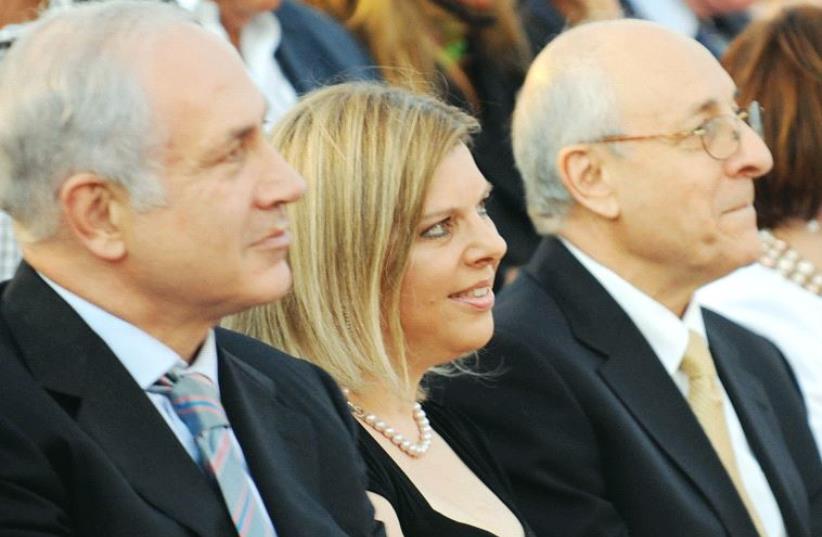 Attorney Yitzhak Molcho (right) sits with Prime Minister Benjamin Netanyahu and his wife Sara
(photo credit: MOSHE MILNER / GPO)
Advertisement
Prime Minister Benjamin Netanyahu’s special envoy and confidant Yitzhak Molcho has been questioned for three days for his alleged involvement in the bribery probe into Israel’s purchase of German-made naval vessels, known as Case 3000.His law partner David Shimron, who is also Netanyahu’s cousin, has similarly been probed by police for the last three days for his alleged involvement.The two were confronted at the Lahav 433 anti-corruption police unit headquarters in Lod with state’s witness Miki Ganor late Monday night.Ganor was the representative in Israel of German shipbuilder ThyssenKrupp, and Shimron served as his lawyer.According to media reports, Molcho confirmed that he met once with Ganor after the latter initiated the meeting.Channel 2 News reported that the submarines subject did come up in that meeting, and it quoted testimony on them from that meeting.“I have very good connections in Germany,” Ganor said, according to the report. “I want... and I’m asking you to open a door for me at the Prime Minister’s Office.”Molcho replied: “I am not working in Europe. I am working with the Americans and the Palestinians. I cannot help you.”Molcho is reportedly suspected of having committed breach of trust. Even though he was not a government official, the police reportedly are treating him as one due to his involvement in state affairs.Channel 10 News reported that the police are checking if Molcho was mediating between the German company and Israel, following a request by ThyssenKrupp that as a condition to the deal, it build a wastewater treatment facility in Gaza, a move to which Israel objected.Molcho did not report on the upcoming deal with ThyssenKrupp that was planned by Shimron, according to Channel 2.The police believe Molcho’s role in the case was minor compared with Shimron’s, which is at the core of the case, the report said.According to Channel 2, Molcho said, “I have no part in the ‘submarines affair.’ Everything I did throughout the years was purely for the good of the country.”Molcho has already been scheduled to resign from his post as Netanyahu’s special envoy. During Netanyahu’s first term from 1996-1999 and again during the last eight years of Netanyahu tenure as prime minister, Molcho has represented the State of Israel diplomatically in talks with the US, Europe and Arab states, including the Palestinians.Molcho’s connection to Netanyahu is personal – the two men grew up in Jerusalem’s Rehavia neighborhood, and have known each other since childhood. Molcho’s wife is also Shimron’s sister.“Both he [Molcho] and Shimron are connected at the hip,” said political pollster and commentator Mitchell Barak, who has worked in the past for Netanyahu, former president Shimon Peres and former prime minister Ariel Sharon.Barak said he was surprised to hear of the allegations against Molcho, whom he described as an “honest” and a “straight shooter.”But over time and including on Tuesday, politicians have questioned the wisdom and legality of Netanyahu’s decision to privatize the country’s foreign relations by using a personal envoy, rather than a foreign minister, as such a move lacks oversight.Netanyahu has in the past defended Molcho as an honest man who has served his country, and his position as a personal envoy had the approval of the attorney general’s office.Netanyahu himself is not a suspect in Case 3000.Netanyahu is involved in two other police investigations: Case 1000 (“the gifts affair”), in which it is suspected that he received expensive gifts from different businessmen; and Case 2000 (“the Israel Hayom affair”), in which he allegedly negotiated with publisher Arnon “Noni” Mozes for favorable Yediot Aharonot coverage in exchange for his support of a bill to weaken Israel Hayom, the largest circulation Hebrew-language newspaper and Yediot’s bitter competitor.In August, the court revealed that Netanyahu is suspected of bribery, fraud and breach of trust in those two cases.Channel 2 News reported on Tuesday that Ambassador to the US Ron Dermer, who is also considered a confidant of Netanyahu, testified in Case 1000 about his alleged actions on behalf of Netanyahu to help movie mogul Arnon Milchan get a US visa. He approached then-US secretary of state John Kerry in the matter, the report said.