‘I think the extremists fail to see us as people,’ says groom regarding decision to marry during this year’s annual parade 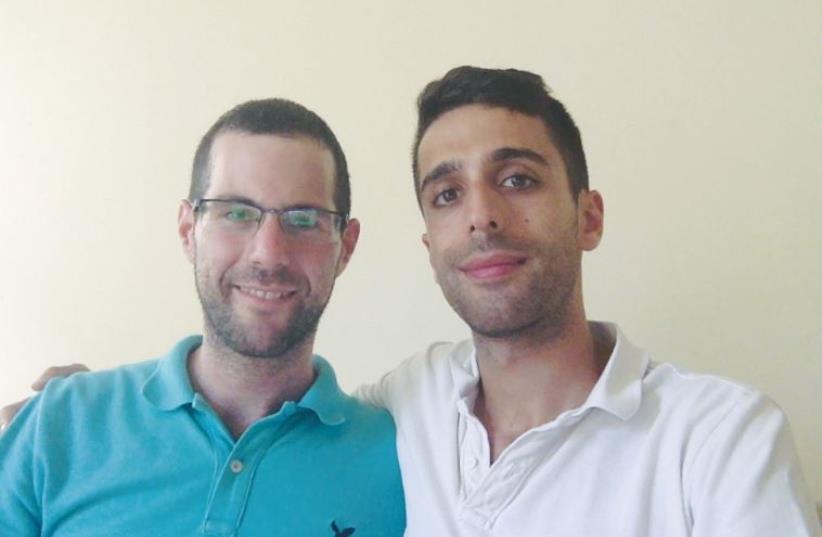 YOCHAI WERMAN (left) and his partner, Yotam Hacohen, will hold a symbolic wedding during today’s Gay Pride Parade.
(photo credit: Courtesy)
Advertisement
One year after being targeted by an intolerant killer for their sexual orientation, two men who were born and raised in Jerusalem, will wed at the capital’s annual Gay Pride Parade on Thursday.Yochai Werman, 30, and Yotam Hacohen, 27, said on Wednesday that their wedding is a direct response to last year’s murder of Shira Banki, 16, who was stabbed to death by a religious zealot for participating in the annual LGBT march.“I think it was a shock to everyone in Israel what happened last year,” said Werman of the stabbing rampage carried out by Yishai Schlissel, who wounded six others, and was sentenced to life imprisonment at Jerusalem District Court last month.“We were there, and it was horrible. So, it got us thinking the entire year about what we can do to make ourselves feel better, to make the community of Jerusalem feel better, and make this year’s pride parade better and stronger.”The answer, Werman and Hacohen concluded, was to wed during this year’s parade.“We thought this would be a good idea – both to make it happier for us, and to have people that we love join us and march with us,” said Werman, noting the couple will exchange vows at Liberty Park before the procession begins.Asked if he was at all nervous following last year’s attack, Werman said: “A little, but I’m pretty certain that the police will do their job right. I think they are coming with resources this year, and doing everything they can to make it safe.”Indeed, police announced earlier this week that hundreds of officers from various units will provide security during the parade.With respect to haredi (ultra-Orthodox) and rightwing condemnation of the parade, which vocal members of the communities have repeatedly deemed immoral and a form of incitement, Werman said such discrimination is a form of dehumanization.“What we do is good,” he said. “It’s about love and about peace, and I think that everybody who sees us as people will understand immediately that this is not incitement, and that there is nothing wrong with what we do.”“I think that the [extremists] fail to see us as people.I think that if they saw us as two people getting married on an important day in their life, declaring their love to each other, that they will understand that only good things can happen from what we do.”Werman continued: “What we are doing is not for the extremists, but for the silent majority. We are sure that the silent majority of Israel is pluralistic and open, and willing to accept that we are part of the community. We call on them to show us that this is the case.”In terms of Jerusalem Mayor Nir Barkat’s Wednesday announcement that he will not march in the parade due to opposition from his haredi constituency, Werman said he is deeply disappointed.“Both Yotam and I voted for him twice,” he said in frustration. “This mayor ran on the secular vote of Jerusalem; he was the secular candidate against a religious candidate [Moshe Lion], and I think this is a travesty what’s going on.“It’s obvious to me that he doesn’t want to be the mayor anymore. I think he’s heading toward national politics, and this is his way of saying ‘I don’t care about Jerusalem anymore. I’m going to make these political calculations, and not care about the people of Jerusalem.’” Hacohen echoed Werman’s sentiments that their wedding at the parade is a direct response to last year’s violence, and intolerance in general.“This is our way of calling our friends and family and telling them that right now the public space is not safe enough for the LGBT community in Jerusalem,” he said. “We’re telling the people who support us that we need your support right there. This is important to us, and this is when we need you to be there for us.”Moreover, Hacohen said that as long as the LGBT community continues to be marginalized and attacked in the capital, the wedding is necessary.“As long as we have to be afraid of showing our way of life publicly here, this is exactly the reason we need to do this,” he said, adding that he is also disappointed in Barkat’s refusal to attend the parade.“The fact that he said we’re hurting the religious community’s feelings, I don’t see how I hurt anyone,” Hacohen continued.“I’m gay and I have the right to be gay in the public space... and by him saying that is a very dangerous thing.”