Gazans to burn thousands of tires at border

Pictures and videos on social media showed that hundreds of tires have already been transported to the border. 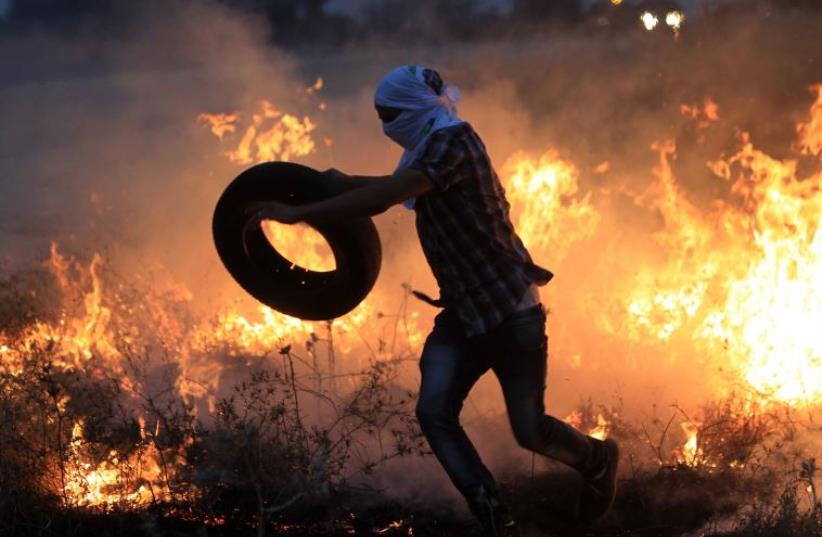 A Palestinian protester throws a tire into a fire during clashes with Israeli security forces
(photo credit: AFP PHOTO)
Advertisement
Palestinians plan to engulf the Gaza border with smoke and flames from thousands of burning tires on Friday as Israel holds firm to its order to shoot any protesters who come close to the security barrier.In the past several days, groups of young Gazans have been collecting old tires around the Strip and bringing them to the border.Palestinians intend to light the tires on fire to blur the vision of the soldiers on the Israeli side of the security fence, according to a Gaza-based source familiar with preparations for what he called “the Friday of Old Tires.“The hope is that the soldiers will not be able to shoot because the thick, black smoke will block their line of vision,” he said in a phone call with The Jerusalem Post on Wednesday.Pictures and videos on social media showed that hundreds of tires have already been transported to the border.Last Friday, some 30,000 Gazan protesters participated in the launch of a planned sixweek event called the “Great March of Return,” in which Palestinians hope to break through the border to return to the sites of pre-1948 communities located within Green Line Israel.The IDF shot and killed 17 protesters who were close to the Gaza fence last Friday, including one who later succumbed to his wounds. An 18th Palestinian killed on Tuesday was buried in Gaza on Wednesday.While scattered protests have continued throughout the week, it’s expected that another massive protest will take place this Friday.In an Arabic post on his Facebook page, Maj.-Gen. Yoav Mordechai, the coordinator of government activities in the territories, warned that the plan to blind IDF soldiers with smoke will backfire.“It’s the people in Gaza who will be strangled by black smoke – and green onions will not help them,” Mordechai wrote.He warned that the smoke is carcinogenic and is harmful to the respiratory and immune systems.Mordechai also wrote a letter asking the World Health Organization to intervene. Aside from the health issue, he wrote that he feared the burning tires could cause an ecological disaster, by poisoning plants and animals.The United Nations, the European Union and the Palestinians have called on the IDF to hold its fire.But Defense Minister Avigdor Liberman has insisted that he has no plans to change his orders to use life fire if necessary.“We will act exactly we did last Friday. We are not changing our behavior. Anyone who harms Israeli sovereignty and endangers Israeli [security] infrastructure is risking their lives,” Liberman told Army Radio on Wednesday evening.Those who come close to the fence are either Hamas or Islamic Jihad terrorists, or they are paid by Hamas to be there, the defense minister said.The “people in Gaza will be the first to be harmed from these tires,” Liberman told Army Radio.SHIN BET head Nadav Argaman met with Egyptian General Intelligence Services chief Abbas Kamel in Israel on Tuesday to discuss the protests, Army Radio said.Argaman asked Kamel to tell Hamas that the Jewish state has “no tolerance for what is happening” in the border area.B’Tselem on Wednesday launched a campaign called “Sorry, commander, I will not fire” to urge soldiers to disobey their officers and to refuse to shoot Palestinian who approach the security fence.Such orders are unnecessary and illegal under international law, the NGO said.“It is a criminal offense to obey patently illegal orders.Therefore, as long as soldiers in the field continue to receive orders to use live fire against unarmed civilians, they are duty-bound to refuse to comply,” the group said.Liberman has said that most of those killed were known terrorists, including two who were armed, had an explosive device and planned to carry out an attack against Israelis.Palestinians and human rights groups have argued that many of those killed were innocent, including one protester who was shot in the back.The PLO’s Mission to the United Nations wrote a letter to the Security Council on Tuesday in which it renewed its call for international protection for the Palestinians.“Israel’s latest crimes against Palestinian peaceful demonstrators that took place this past Friday, 30 March 2018, are a tragic reminder of the urgency of international action to avail such protection,” the mission wrote.The Arab League issued the same call when it met in Cairo on Tuesday to discuss the deaths during the protest.It also expressed its support on Tuesday for the Palestinian request for the International Criminal Court to open an investigation into the recent “war crimes and crimes against humanity” it said were committed by Israel against peaceful Palestinian civilians.A source involved in the protest said that Gazans participating in it “feel disillusioned about the miserable situation in the Strip.”Many Gazans suffer from shortages of power and clean water, unemployment, rely on international aid and are have limited or no options to travel abroad.“They know that they are putting their lives at risk by going to the border area, but they feel like they have nothing to lose,” the source said.“They feel as if they are already dead.”

Adam Rasgon and Reuters contributed to this report.