Giving back the love 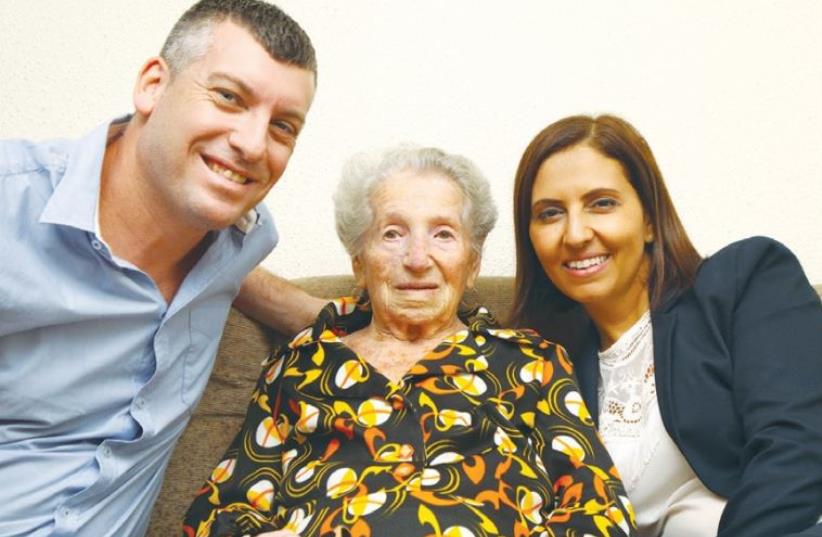 CENTENARIAN RIVKA GOZER gets a birthday visit from Social Equality Minister Gila Gamliel (right) and Matav charity CEO Lior Strassberg at the launch of an annual ‘Giving back the love’ tribute to the elderly.
(photo credit: EFRAT SCHEIN)
Advertisement
Pensioner Affairs Minister Gila Gamliel joined Matav charity heads in paying a birthday visit to a woman who turned 100 on Monday, kicking off an initiative called “Giving back the love,” to encourage Israelis to make time in their schedules to spend time with elderly relatives close to their hearts.The project was organized in collaboration with the Ma’ariv newspaper, which is owned by The Jerusalem Post LTD
Matav chairman Ami Bergman and CEO Lior Strassberg joined Gamliel in visiting Rivka Glozer to celebrate her 100th birthday, and called on the public to visit senior citizens to whom they are close.Matav said the goal of the initiative, timed for Senior Citizens month, is to strengthen the connection between younger Israelis and their elders, and to raise awareness about the isolation and loneliness many senior citizens face.Gamliel decided to pay a visit to Glozer after being asked by the woman’s family to send her a birthday greeting.“Seeing an 100-year-old woman who is joyful and full of life and surrounded by the people she loves warms the heart,” Gamliel said.Strassberg said “the older generation, like Rivka, is the foundation our society is built on and therefore it is our moral obligation as a society to work on behalf of senior citizens to improve their quality of life.”He said he plans to make “Giving back the love” an annual event for many years to come.