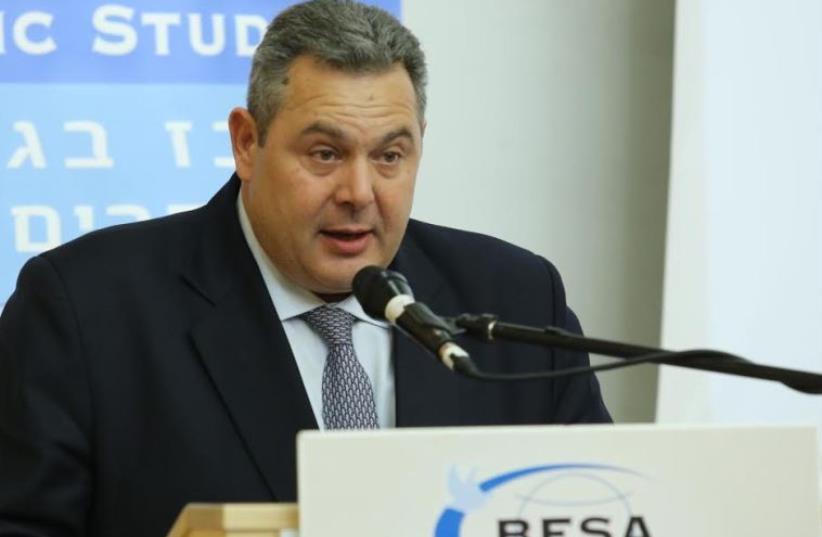 Greek defense minister Panos Kammenos speaking at the Begin-Sadat Center for Strategic Studies.
(photo credit: YONI REIF BESA CENTER)
Advertisement
ATHENS — Greek Defense Minister Panos Kammenos called on the Justice Ministry to take action against a neo-Nazi lawmaker after he made anti-Israel comments in parliament.Speaking during a debate in parliament on Monday, Christos Pappas, from the Golden Dawn party,  called Israel an “eternal enemy of Greece and Orthodoxy.”Pappas was speaking during a debate on the ratification of Greece’s international agreements with other countries.“The state of Israel implements genocidal methods and is a regional troublemaker,” he said, according to the Kathemirini newspaper, asking how “a state like Israel could possibly have relations with Greece, which is the cradle of civilization and humanism.”Defense Minister Kammenos, a member of  the nationalist Independent Greeks party, called Pappas’ remarks racist and xenophobic and called on the justice ministry to take action against him.Kammenos has himself in the past been criticized for anti-Semitic comments, after claiming in 2014 that Greek Jews paid fewer taxes than other Greeks, but since taking up the position as defense minister has overseen increasingly warm ties with Israel.Golden Dawn, which is the third largest party in Greece, frequently uses Nazi imagery. Its leaders have denied the existence of Nazi death camps and gas chambers.Much of its leadership is on trial for running a criminal organization accused of being behind dozens of racist attacks on immigrants and the killing of a left-wing activist.