The Elad foundation contends that the compound would be instrumental in drawing tourists while the opposing NGOs denounced the center as destructive. 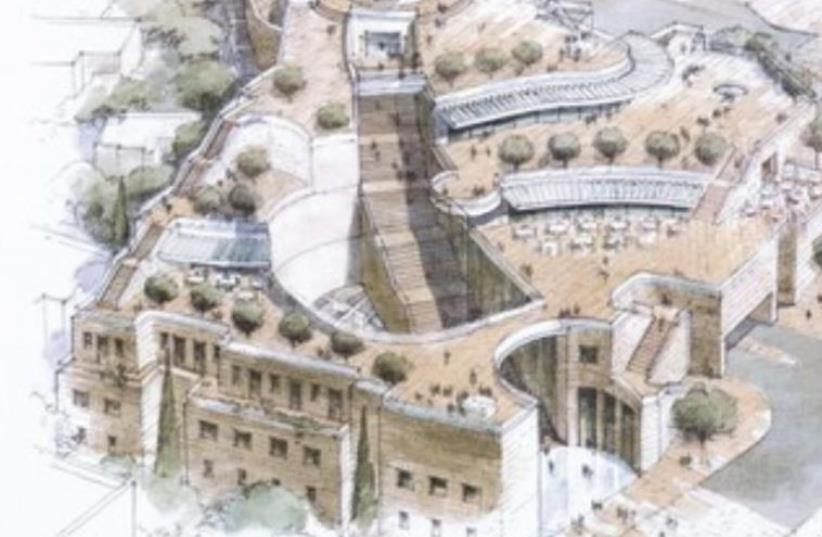 An artist's rendering of the Kedem Center
(photo credit: Courtesy)
Advertisement
The National Planning and Building Appeals Committee approved, but ordered a scaled-down version of, the proposed Kedem Center – a highly contested visitors compound to be operated by a right-wing NGO over an active excavation site in east Jerusalem’s Silwan, opposite the Old City’s walls.The Sunday night ruling was followed Monday morning by dueling statements claiming victory from the Ir David Foundation (Elad), which initiated the project, and the left-wing NGOs Ir Amim and Emek Shaveh, which jointly filed a petition to block it.While Elad, which operates the City of David National Park, contended that the compound – located south of the Dung Gate over the Givati Parking Lot – would be instrumental in drawing tourists by housing ancient archeological findings, the opposing NGOs denounced the center as destructive.In their January petition, the European-funded organizations had claimed the center would result in “destruction and damage to the fabric of ancient Jerusalem” by harming relics located under the building while contributing to the “Judaization” of east Jerusalem.Meanwhile, Elad – which intends for the structure to serve as the entryway for visitors to the Jerusalem Walls National Park, including the City of David, Mount Zion and Ophel and Hulda Gates – said the center will strengthen the capital by celebrating its shared history.While conceding that the committee’s ruling to revise and resubmit the center’s blueprint to limit its scope “will detract from the visitor experience,” Elad’s statement lauded the outcome for rejecting many of the central claims laid out by the opposition.“The committee’s decision is nothing short of a victory for the Kedem Center, with the committee acknowledging that it will benefit the millions of people – of all faiths and backgrounds – who have, and who continue to, visit the City of David and its environs, seeking to connect with the history of ancient Jerusalem,” the statement read.“We applaud the overall ruling… which will advance the main goal of preserving the archeological and historical antiquities of ancient Jerusalem and sharing them with people of all faiths and backgrounds from all over the world.”The statement continued: “The committee ruled that given the strategic and historic significance of the venue in question, there is great importance in having a visitors center built specifically on the site of the Givati Parking Lot excavation.”“Establishing a visitors center on this venue,” it added, “without a doubt, will generate a high level of activity that complements the historic and archeological significance of the area.”Elad also declared victory over the committee’s rejection of the petition’s claim that the center’s roofline, which will sit 6.5 meters below the Old City walls, would be built too close to the ancient walls.Moreover, it noted that the committee agreed that Elad could oversee the center “without negatively impacting Israel’s international standing or foreign policy.”“There was no reason whatsoever to prevent the Elad Foundation from operating the proposed visitors center in accordance with the existing agreement, whereby overall discretion in relation to both the management and operation of the site will belong to the Israel Parks and Nature Authority,” the committee ruled.Elad emphasized that it will continue to work closely with the Israel Parks and Nature Authority, Israel Antiquities Authority and Jerusalem Mayor Nir Barkat, who has championed the project as vital to the capital’s growth.However, in its statement, Emek Shaveh described the ruling as “a hard blow” to the Elad Foundation by forcing it to send a revised plan back to the Regional Planning Committee “to significantly shrink the size of the building and to renew the discussion concerning the preservation of archaeological sites.”“The committee accepted a significant portion of the claims presented by Emek Shaveh and the other petitioners, and sent the procedure concerning the Kedem Compound back to the Regional Planning Committee,” the statement said.Additionally, Emek Shaveh said the decision will “basically mean that there will be a long delay in the building procedure.”“If, and when, the building goes up, its size will be considerably more modest and less threatening to the character of historical Jerusalem,” the statement continued.“The National Appeals Committee fragmented Elad’s monstrous building plan and established principles which create a precedent for any building plans on archaeological sites in the country.”Elad added that it will study the detailed ruling of the committee and “move forward with the planned center accordingly.“The document of the decision of the committee concerning the Kedem Compound is lengthy and detailed,” the statement concluded.“We intend to study it closely in the coming days and then consider our future actions.”According to the committee’s ruling, apart from significantly downsizing the center, a planned parking garage for as many as 250 vehicles next to the site must be redesigned, and any plan for the preservation of the archaeological site must be submitted for public debate.