Many of the changes will be overseen by a committee whose members will be at least half Ethiopian. 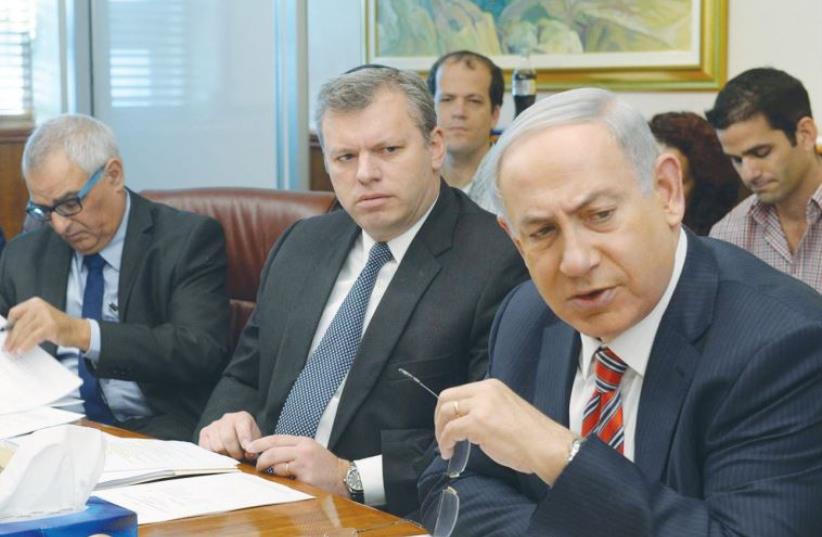 PRIME MINISTER Benjamin Netanyahu participates in a ministerial committee meeting aimed at promoting the integration of Ethiopian immigrants
(photo credit: AMOS BEN GERSHOM, GPO)
Advertisement
The ministerial committee to promote the integration of Ethiopian citizens into Israeli society today approved three hundred million shekels in spending toward the goal of bridging the gap between Ethiopians and the rest of Israeli society.According to plans presented by Prime Minister’s Office director-general Eli Groner, programs for Israeli-born Ethiopian citizens will be moved to the relevant ministries from the Immigrant Absorption Ministry.The government will seek to improve Ethiopians’ access to education and healthcare, and to provide services at a higher level, the government announced.The number of Ethiopian teachers will be increased, and the number of students who graduate from high school will be raised, the government said. Schools in which there is a high proportion of Ethiopian students will receive budget increases.Many of the changes will be overseen by a committee whose members will be at least half Ethiopian.Prime Minister Benjamin Netanyahu chastised Welfare and Social Services Minister Haim Katz for showing up only shortly before the end of the meeting.“Where is he, in the protest tent?” Netanyahu said in a reference to Katz’s participation last week in a demonstration held outside the prime minister’s residence organized by settlement leaders who have set-up a protest tent outside his home.“It is a disgrace that the welfare minister does not come to this discussion,” Netanyahu was quoted as saying.Ethiopian MK Avraham Neguise said that while he approved of the effort, he was concerned about its implementation, stating that he wanted to see ”detailed plans rather than just lines and rules presented.”MK David Amsalem, chairman of the Knesset Interior and Environment Committee, on Sunday connected the issue of Arab unrest in Israel to that of immigration from Ethiopia.“I am currently in Gondar, Ethiopia in order to regulate the emigration of thousands of Ethiopian Jews so desperate to reach their homeland and reunite with their families.The solution to terrorism is to encourage the immigration of Diaspora Jews and massive construction in Jerusalem and in all Judea and Samaria communities,” the lawmaker said.