The prime minister said that he and the ministerial committee had heard “heart wrenching and hair-raising stories” of racism and discrimination against Ethiopian-Israelis. 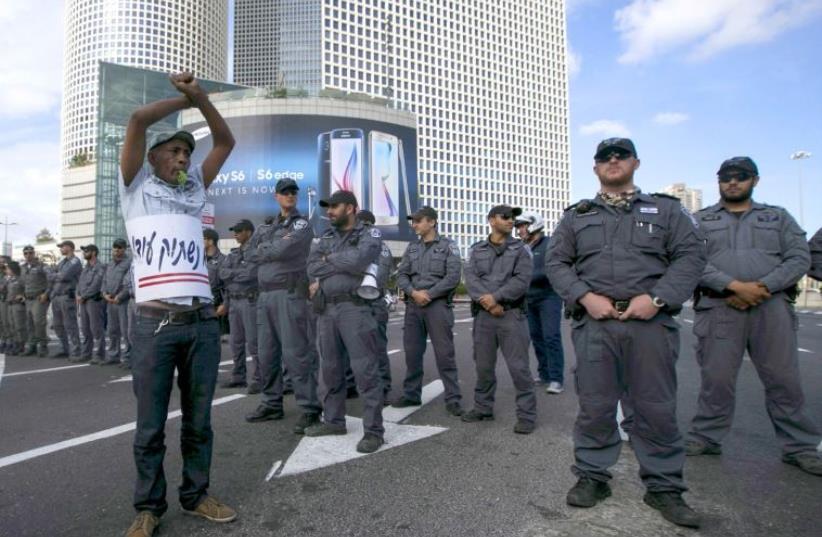 Israelis of Ethiopian origin demonstrated against police racism and brutality, May 3, after a video showing a policeman beating a soldier from the community went viral
(photo credit: REUTERS)
Advertisement
“I am not willing to tolerate racism in our country,” Prime Minister Benjamin Netanyahu said on Sunday evening as attorney Ami Palmor, director-general of the Justice Ministry, presented him with a report with recommendations on how to eradicate racism against Ethiopian Israelis.“I refuse to let people be discriminated against based on the color of their skin; it is a terrible thing,” the prime minister said.The 170-page report acknowledges the racism and discrimination faced by Ethiopian Israelis on a daily basis and presents 53 recommendations for government ministries to implement.An interministerial task force compiled the report following widespread protests by Ethiopian Israelis in May 2015.The prime minister said that he and his ministerial committee had heard “heart-wrenching and hair-raising stories” of racism and discrimination against Ethiopian Israelis.“We decided to take countermeasures against racism even before [hearing the stories],” he said. “But now, due to this report which is a part of our decision-making process, we will take further steps, and I am happy that there are people – women and men – who are steadfast in uprooting this phenomenon from our lives.“This doesn’t suit our country, our citizens, or our people,” he said.The task force met with numerous experts and representatives from the Ethiopian community and heard their grievances before formulating the report.Palmor said: “During our work, the team was forced again and again to look into the mirror that the Ethiopian community in Israel held up for them, and deal with the grim reality, a reality in which our dark-skinned citizens stand out the most and are the most visible [minority], and at the same time, invisible in so many other respects.”The report outlines incidents of racism and discrimination faced by Israelis of Ethiopian background – from rejection of their blood donations and segregation in maternity wards, to their exclusion from schools and workplaces – based on ethnicity and a lack of recognition from the religious establishment.The report also discussed incidents of police brutality, deemed mainly responsible for sparking the protests. One episode that received a lot of the attention was the case of Yosef Salamsa, an Ethiopian-Israeli youth who committed suicide in July 2014 a few months after his arrest in Zichron Ya’acov. Police officers had allegedly abused him. Another incident involved a video that went viral showing police officers abusing Ethiopian-Israeli soldier Damas Pakada in Holon in April of last year.The task force’s main recommendations include the establishment of a unit within the Justice Ministry to coordinate the fight against racism as well as the appointment of an “officer against discrimination and racism” for every government ministry.The task force also called for disciplinary action against civil servants and professionals in cases of “racial harassment” as well as providing free legal representation for those claiming racial discrimination in public places.With regard to the police, the report noted that several recommendations have already been implemented and called for the expansion of several programs to reduce discrimination, including a pilot program that equips officers with body cameras in cities with a high concentration of Ethiopian Israelis.The report also encourages holding seminars for employers and employees to eliminate stereotypes and address racism in the workplace. Other such seminars involve employers and Ethiopian Israelis and explore ways of integrating Ethiopian academics into the civil service.The report recommends that the Education Ministry train and integrate Ethiopian-Israeli educators and school principals. It also urges schools to “increase the use of content and textbooks” pertaining to the history and heritage of Ethiopian Jews, as well as books promoting diversity.Additionally, the report called for increasing the “positive presence” of Ethiopians in the public sphere, culture and media.