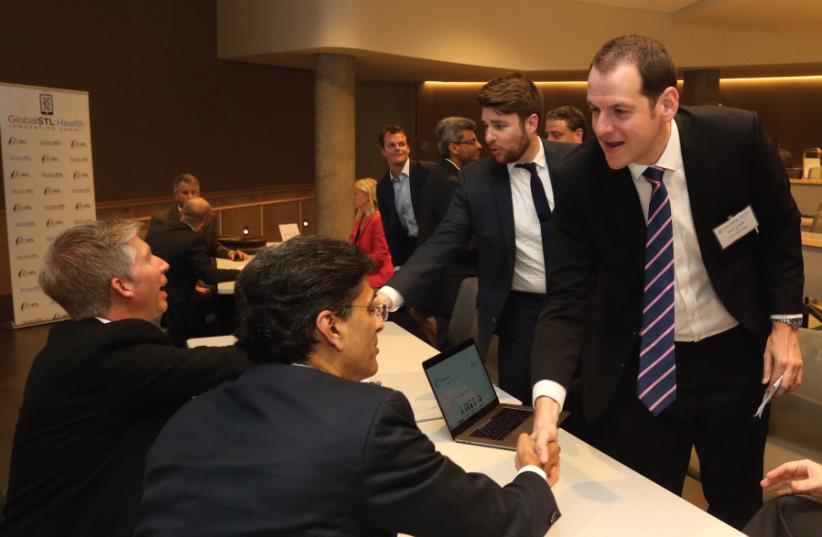 People look for new partners at the GlobalSTL Health Innovation Summit in St. Louis, Missouri, last month
(photo credit: Courtesy)
Advertisement
Fourteen Israeli, Irish, and US innovators in medical technology came together in search of partnerships at a St. Louis conference, looking towards improving global healthcare.While Israel is known for cultivating a strong start-up culture, partnership with Irish companies in the center of the US is unprecedented.“St. Louis has many strong hospital systems – including the headquarters of the largest nonprofit system in the US – and healthcare-focused Fortune 500 corporations,” said Donn Rubin, CEO and president of BioSTL, the umbrella organization whose GlobalSTL initiative hosted the summit.“Not only are there tremendous assets in St. Louis, but we are able to provide access to strategic partners and decision-makers in a timely way beyond what most companies will experience in the larger metropolitan areas on the East Coast or West Coast. And because costs are lower in the middle of the country, opportunities are much more capital efficient,” he said.The companies are innovators in various medical technologies, with capabilities such as managing medicines, monitoring vital signs, and assisting with emotional and behavioral health. More than $7.9 billion was invested in the digital health industry in the US in 2016, and GlobalSTL (along with the umbrella BioSTL) aspired to further business development in the industry with its summit.Israeli company Telesofia realizes its mission of “making medical information clear” through short, personalized videos in English. The videos explain such topics as the medicine’s appearance, dosage, the patient’s medical problem, and treatment.
Ninety nine percent of patients say that the technology is clear, concise, and relevant to them, and the videos are proven to reduce hospital readmissions.
Telesofia’s CEO Rami Cohen stated that Telesofia’s technology is “supporting about 10,000 different medication products that are updated on a weekly basis.” He added that Telesofia is probably the largest video library for medicines in the world.Cohen described the video creation process as almost exclusively automatic, with technologies that read US Food and Drug Administration pamphlets weekly. Telesofia uses manual medical quality assurance, with people who make sure that any changes in the FDA weekly pamphlets are valid. Automatic processes are then responsible for updating the videos, should the FDA changes be valid. For example, if a pill switches from being round and white to oval and blue, Telesofia’s technology will automatically update videos to reflect such a change.The videos and variations use algorithms that Cohen compares to “assembling Legos.” The company has developed a unique way to film its videos that allows the company to create and splice together different clips in one day. Filming and editing occur simultaneously, enabling Telesofia to create a lot of content in a few shooting days.It sends its videos to healthcare companies and pharmacies, which pay for such technologies along with organizations such as the Bird Foundation who provide grant money.These companies input patients’ medical information and then send the automatically generated videos to patients via text or email, with no app download necessary.Telesofia has other videos that enable the patients to put in their own medical information. It collaborates with Tribune Content Agency in Chicago to develop a technology that allows users to learn more about wellness topics such as cardiovascular risk. The wellness videos, like the rest of Telesofia’s content, are personalized, with patients answering a few questions through an online wizard and then receiving videos moments later.The company is also expanding its patient discharge instructions video library and creating video series. Its pneumonia discharge instruction videos alone consist of 106 quadrillion (15 zeros) variations, sent by healthcare companies and pharmacies to patients.Telesofia Medical is the winner of the Frost & Sullivan 2016 New Product Innovation Award for best practice, receiving a whopping 9.5/10 score that topped the second-place competitor at 7.2/10. It was also ranked by Inc. magazine as number one on its list of 10 Tech Companies Impacting Humanity.Cohen said that he is proud to represent Israel internationally through Telesofia and hopes to further his global connections, with plans to create videos in different languages.Sixty percent of Telesofia’s current client base is in the United States.One of the Irish companies who attended the summit, Beats Medical, has developed a smartphone application to provide specialized treatment for people with Parkinson’s disease.CEO Ciara Clancy was inspired to start Beats Medical from her work as a physiotherapist and researcher who had cared for people with Parkinson’s.Beats Medical’s app for Parkinson’s treatment features innovative technologies such as a built-in metronome that serves as a “beat” for people with Parkinson’s to walk to.It also consists of speech and language therapy and dexterity training, helping people improve their vocal volume and handwriting. The app is currently available for use in 40 countries, including the US and Israel, and has been on the market for the last 2.5 years.Its results have been life-changing.One person walked the length of the UK, more than 1,000 km., with the app’s Parkinson’s technology.Other users have been able to walk to shops again and resume many daily activities.Clancy’s goal is that Beats Medical’s smartphone applications will allow people to “live independent lives through technology as long as they can.”“We want them to live as people, not patients,” she said.Beats Medical is currently developing apps for dyspraxia, multiple sclerosis, strokes, and cerebral palsy, aspiring to improve the lives of people with neurological conditions, which cost the US $800b. per year.BioSTL had been bringing St. Louis delegations to Israel and vice versa for agricultural technology, healthcare, financial technology, and cyber security over the last three years. Already, five Israeli Agtech companies have established US headquarters in St. Louis.