Hundreds of former residents of Gush Katif and Northern Samaria congregated at the President’s Residence where President Reuven Rivlin had initially been scheduled to address them. 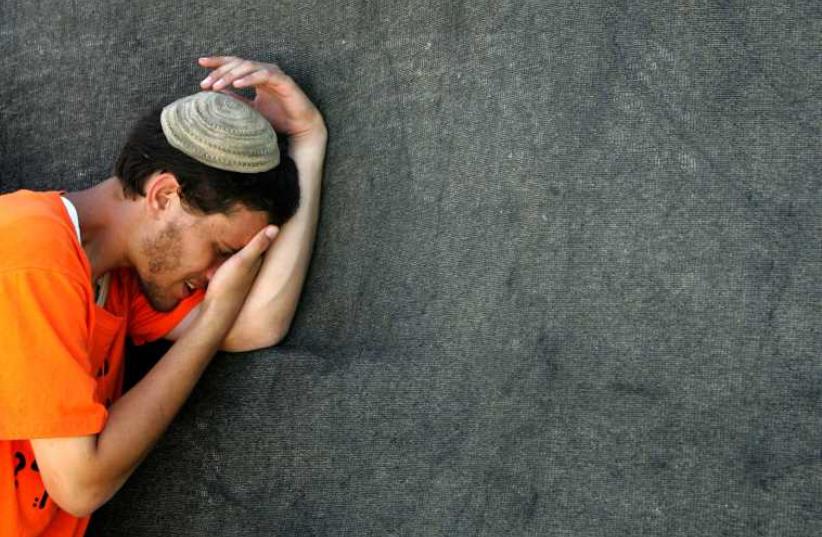 An Israeli opponent of Israel's disengagement plan from Gaza mourns before evacuation in the Jewish Gaza Strip settlement of Kfar Darom
(photo credit: REUTERS)
Advertisement
Hundreds of Israelis whom the state evacuated from the Gaza Strip and northern Samaria during the disengagement in 2005 on Wednesday night marked the 10th anniversary of their uprooting.They met at the President’s Residence where President Reuven Rivlin had been scheduled to address them.It was the first anniversary of the evacuation marked under the patronage of the president, in what was essentially a state ceremony.Because Rivlin is in mourning for his sister Esther Herling Binyamin, who died on Monday, his wife, Nechama, delivered an address in his stead, as did Knesset Speaker Yuli Edelstein.Edelstein was one of the evacuees. Ten years ago, he lived in Moshav Gadid, in the heart of Gush Katif. A neighbor from across the road had come to him asking “Why Yuli? Why?” He did not have an answer then and confessed that he still does not have an answer today. All he knows, he said, is that the government of Israel ruined lives and uprooted whole communities, tore down all that was built and even dug up that which was buried, and in return for all that received rockets fired at Israel, wars and two body-snatched soldiers whose remains have yet to be returned by Hamas.“Reality hit us in the face,” said Edelstein. “The majority decides, but the majority is not always right. We accept the decision of the majority, but we don’t have to agree with it.”Edelstein had harsh words not only for the government of the time but also for the media, which he said had decided what the public should know and shouldn’t know so long as what it published served the cause.He was angry that people had not come up with solutions for the evacuees 10 years ago, and said that those who did try to propose solutions were silenced.The event to mark the forced uprooting of more than 10,000 Israelis from 21 Gaza Strip and four northern Samaria settlements was a joint initiative of the President’s Office, the Gush Katif Heritage Center in Nitzan and the Northern Samaria community.As Knesset speaker in 2005, Rivlin was opposed to the disengagement, and he has given moral support to the displaced communities ever since.According to the Gush Katif archives, the disengagement included the destruction or uprooting of approximately 1,900 homes and gardens, 400 farms producing $200 million of export goods each year, 42 daycare centers, 36 kindergartens, seven elementary schools, three high schools, an industrial center, 18 mikvaot ritual baths, 18 synagogues, one central community center, one swimming pool, two Torah institutions, one research center, youth clubs, three main libraries, one hesder yeshiva (military-Torah institution), study centers) and dozens of small businesses.Speakers at Wednesday’s event included Rabbi Yigal Kaminsky, the former chief rabbi of Gush Katif, and several former residents of the area including David Hatuel, whose pregnant wife, Tali, and four daughters ages two to 10 were shot dead by terrorists from Khan Yunis as they approached the Kissufim crossing near their home in Gush Katif in May 2005, when Tali had gone out to protest against the evacuation.Hatuel was evicted from his home on his 36th birthday.“I became a refugee,” he recalled.Hatuel said that he could not understand why the government had turned its back on Jewish settlement. He has since remarried and fathered a new family He lives with his wife, Limor, and their four children in the trailer home community of Karmei Katif, southeast of Kiryat Gat, where he and his neighbors keep hoping that one day they will have permanent housing.Kaminsky said that more than any of the physical attributes and wondrous scenery of Gush Katif, what had impressed him most was the spirit of the place and the way people had been able to interface their lives with Torah in the most natural way.“This was Zionism at its best,” he said.Reading the speech that her husband would have delivered, Nechama Rivlin stressed the importance of remembering the Gush Katif story and said the Jewish way of remembering is to teach it diligently to your children.A video of the evacuation was screened showing crying soldiers and weeping evacuees who had decided that even if there was resistance to the evacuation, there would be no violence, because above all they wanted to prevent a civil war.Men and women in the audience wiped tears from their eyes or gaped open mouthed.Outside the President’s Residence, bearing orange flags and wearing the orange caps and T-shirts that were the uniform of the protest movement against the disengagement displayed large placards and posters with signs that read: “You said there would be a solution for every settler within a year,” “A decade after the expulsion we are still refugees in our own country” and “350 families are still without permanent homes.”