In response to the incident, the publication released a statement confirming that the account was hacked. 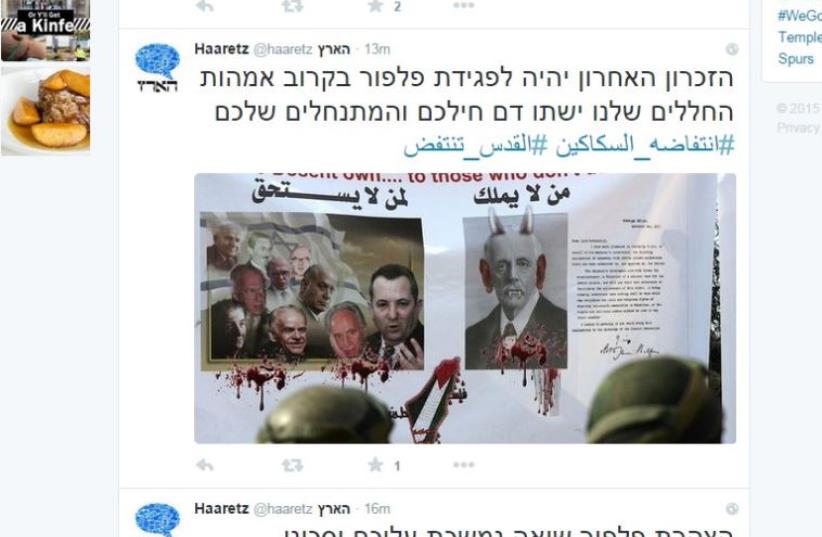 Haaretz twitter account hacked
(photo credit: screenshot)
Advertisement
Pro-Palestinian activists hacked into the Twitter feed of the Ha’aretz newspaper’s website Tuesday, the 100th anniversary of the Balfour Declaration, leaving ominous messages.Almost a dozen tweets written in Hebrew and Arabic cluttered the publication’s feed, with tweets such as : “The memory of the Balfour Declaration has changed the situation, wait for the massacre that will be arriving soon” and “The mothers of our martyrs will drink the blood of your soldiers and settlers.”Another tweet reads, “The holocaust of the Balfour Declaration will continue the knife intifada.” The post was accompanied by a disturbing image of a wounded Israeli victim, a clear reference to the current terrorist attacks in Israel and the West Bank.Other images included current and former Israeli leaders, as well as the United Kingdom’s former foreign secretary and declaration author, Arthur James Balfour, covered in blood or adorned with devil horns.In response to the incident, the publication released a statement confirming that the account was hacked. Ha’aretz contacted Twitter in order to resolve the problem, which persisted for approximately one hour.The publication also took to Facebook to issue a warning, writing on its wall that “Someone took to our Twitter account, but did not succeed in frightening us. We will respond at the right time and the right place.”