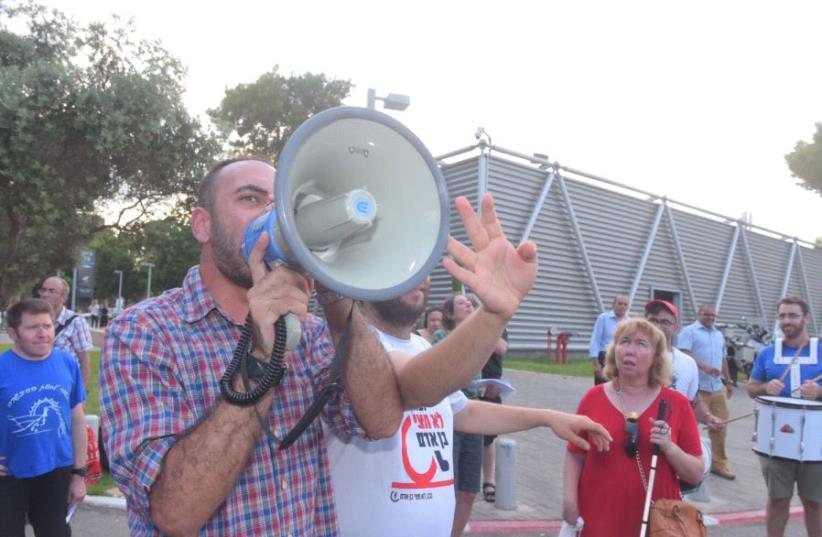 Handicapped protesters demonstrate before pro-PM rally.
(photo credit: AVSHALOM SASSONI/MAARIV)
Advertisement
Disabled activists blocked major Tel Aviv streets leading to a pro-Netanyahu rally that took place on Wednesday evening. The rally was held in support of the Israeli prime minister, currently embroiled in criminal investigations. The event, held at the Tel Aviv Fairgrounds, was open only to members of the prime minister's Likud party. "Both my parents are handicapped and they have nothing to eat!" said a protester who was interviewed on Channel 2 news. The various groups leading the protest explained that they had gathered to protest the government's ongoing neglect of their needs."This is not an issue of the [political] right or left," said protesters. "If discrimination of human rights is not corruption, what is?"The groups have recently appealed to the Supreme Court, demanding that the social benefit sums received by handicapped people in Israel should be raised to meet the monthly minimum wage in Israel.The Knesset submitted on Wednesday its response to the court, in which it stated that the burden of proof is on the plaintiffs, who must demonstrate that their human dignity is indeed hurt due to insufficient material comfort.