Is the new Jordanian PM Israel's new friend in the Middle East?

The Jordanian media has referred to Hani al-Mulki as "the head of normalization with Israel." 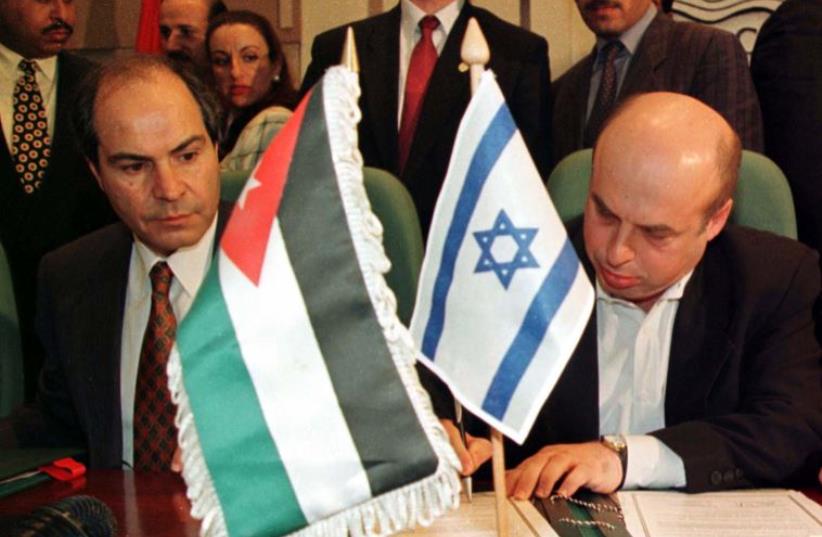 Israeli Trade Minister Natan Sharansky (R) signs an agreement to expand economic ties with Jordan while his Jordanian counterpart Hani Mulqi watches, 1998
(photo credit: REUTERS)
Advertisement
As security coordination between Jordan and Israel tightens, a rapprochement between the nations may now appear to be extending into the the political sphere. On Sunday, Jordanian King Abdullah dissolved the parliament and appointed Hani al-Mulki, a veteran politician who played a major role in the Kingdom's peace negotiations with Israel, as the country's new prime minister in place of Abdullah Ensour, who resigned earlier this month. Since the King announced the appointment, Jordanian media has referred to Mulki as "the head of normalization with Israel."Mulki is a veteran Jordanian diplomat and headed the country's delegation to peace negotiations with Israel in 1994.Subsequently, as Jordan's foreign minister, he met with a long list of senior Israeli politicians. In 2005, he held talks with then-Prime Minister Ariel Sharon and his deputy at the time, Ehud Olmert.When he was Minister of Water and Irrigation, Mulki was an ardent supporter of the Red Sea-Dead Sea Canal - a joint Israeli-Jordanian economic project - which strove to channel water from the Red Sea to the Dead Sea to replenish its dwindling water supply. According to diplomatic sources, Mulki was responsible for reviving the project in 2005.Additionally, Mulki's appointment bodes well for Israel as he is a prominent opponent of Iran and acts as a counterweight to the Islamic Republic's efforts to radicalize the Middle East into what he refers to as the "Shi'ite Crescent."