They insisted that Yishai Schlissel, who murdered Banki, was not representative of the haredi community. 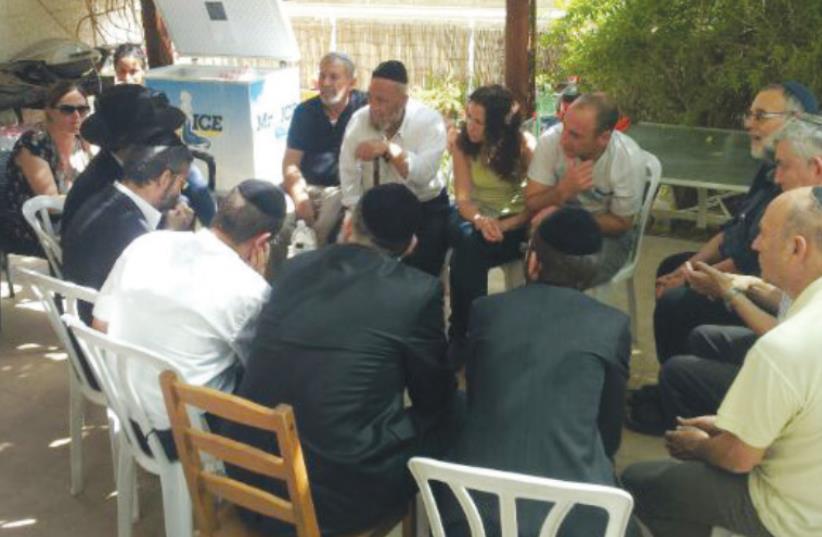 ULTRA-ORTHODOX activists visit the Jerusalem home of the parents of Shira Banki, who was murdered at the Jerusalem Gay Pride Parade two weeks ago, on Friday.
(photo credit: GESHER)
Advertisement
A group of haredi activists have paid a visit to the parents of Shira Banki, the young woman who was killed by an ultra-Orthodox man during the Jerusalem Gay Pride parade two weeks ago.The activists, from the Gesher organization that promotes mutual understanding between societies in Israel, visited the Banki family on Friday saying that although they were opposed to homosexual lifestyles, they totally rejected violence.They insisted that Yishai Schlissel, who murdered Banki, was not representative of the haredi community.“We have a difference of opinions, and we cannot agree to the LGBT [lesbian, gay, bisexual and transgender] way of life, but the way to express our opposition is through dialogue and not through violence,” the activists told the family.
Jewish People Policy Institute senior fellow discusses Jewish terror
Banki was not part of the LGBT community, but chose to participate in the march in support of their societal acceptance and rights.“It is our responsibility to ensure that our hands did not shed this blood, and that a ‘wild weed’ like Schlissel does not God forbid spring up again tomorrow. At the end of the day, we live in the same country and we have to learn to live together side by side. Otherwise we will not be able to exist here,” the group said.Banki’s parents said they were touched by the visit and said that the ultra-Orthodox activists were courageous for doing so.Although the haredi media refers to gay pride marches as “Marches of Abomination,” a moniker that was used even after the stabbing attack at the Jerusalem march, senior haredi political leaders publicly and vehemently denounced the attacks.Senior United Torah Judaism MK Moshe Gafni said after the incident, “The attempt to kill and injure is something severe that we utterly reject and is something that is opposed by Judaism, morality, Jewish law and our path since we have been a people.”Shas chairman and Economy Minister Arye Deri condemned the attack, as did Ashkenazi Chief Rabbi David Lau and Sephardi Chief Rabbi Yitzhak Yosef.