The effigy was complete with an IDF uniform and equipment, a beard and tzitzit, and was burned alongside numerous Israeli flags in the festive bonfires. 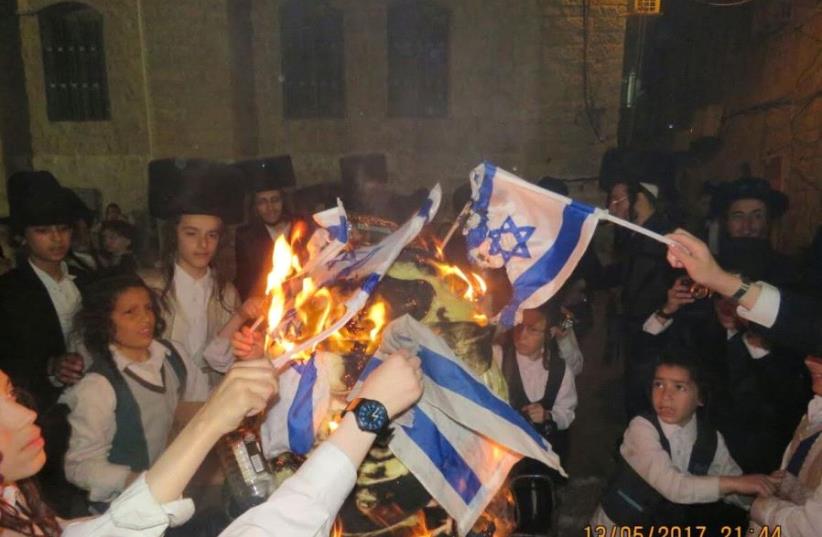 Haredi extremists burn haredi IDF soldier in effigy
(photo credit: HAIM GOLDBERG)
Advertisement
For the second time in less than two months, haredi (ultra-Orthodox) extremists in the radical Mea She’arim neighborhood of Jerusalem burned a haredi IDF soldier in effigy on Saturday night, during bonfires set to mark the Lag Ba’omer holiday.The incident led to denunciations from across the political spectrum, including the prime minister and defense minister, although criticism from the haredi political parties was almost entirely absent.This is the second such incident in the last two months, after extremists hung an effigy of a haredi IDF soldier in the same neighborhood on Shushan Purim in March.The effigy was complete with an IDF uniform and equipment, a beard and tzitzit, and was burned alongside numerous Israeli flags in the festive bonfires.The latest effigy burning is only the latest in a long series of events and campaigns by radical factions in the haredi community designed to delegitimize and ostracize haredi men who enlist to the IDF.Effigy burning is a common practice for haredim on Lag Ba’omer, and the unlucky victim is usually the bette noir of the haredi community at the time.In 2014, it was Yesh Atid leader Yair Lapid who was ceremonially immolated for his efforts to draft haredi men into the army, among other policies that drew the ire of the ultra-Orthodox world.Speaking at the weekly cabinet meeting, Prime Minister Benjamin Netanyahu denounced the incident, describing it as “abominable” by “extremists and marginal factions” in haredi society.“This action is disgusting,” said Netanyahu. “IDF soldiers protect us all, including haredim, including these people,” he concluded, adding that he expected “all public leaders” to condemn such incidents, perhaps in reference to the leaders of the haredi political parties.Neither United Torah Judaism chairman and Health Minister Ya’acov Litzman nor Shas chairman and Interior Minister Arye Deri, and almost no other haredi MKs, commented on or criticized the burning in effigy.One exception was MK Yaakov Margi who blamed “the government, the police and the State Attorney, who have acted flaccidly against these law breakers.”Defense Minister Avigdor Liberman described the occurrence as “shameful,” writing on Twitter that it required “determined and uncompromising treatment by the police, and clear condemnation by the heads of haredi society.”In an interesting twist, the haredi news site Kikar Hashabbat reported that in one bonfire in the haredi city of Modi’in Illit, an effigy of a so-called “prisoner of the Torah world” was created and set alight.“Prisoners of the Torah world” are young haredi men who fail to report to the IDF enlistment offices when called to receive their military service exemptions, as most haredi men do, and are subsequently arrested by the military police for the crime of desertion.A radical group called the Jerusalem Faction actively encourages such men not to report and celebrates them when they are sent to prison. The burning in effigy of such people demonstrates both the bitter political divide between the Jerusalem Faction and the mainstream haredi community, as well as perhaps resentment at the bad name this group has bestowed on the general haredi public.On Sunday, Maariv reported that a new booklet produced by the radical elements behind the anti-haredi enlistment campaign was distributed over Lag Ba’omer, instructing yeshiva students how to evade service if they do end up at the enlistment offices.The booklet describes various methods to avoid service and alleged tactics of IDF personnel who will try and convince the young haredi men to enlist.It also compares the personnel who conduct physical examinations in IDF recruitment offices to Nazi officials who conducted selections at death camps.“In the coming hours [of examinations] they will examine every smile and every sentence of yours in order to give you the lethal examination, similar to the ‘examiners’ at the gates of the death camp of Auschwitz who examined the physical state of every lad, even the smallest change can determine your fate of death,” reads the booklet.