“Children need the right information for the modern world. God put us on this world in the 21st century, and we need to know how to be able to live our lives in these times.” 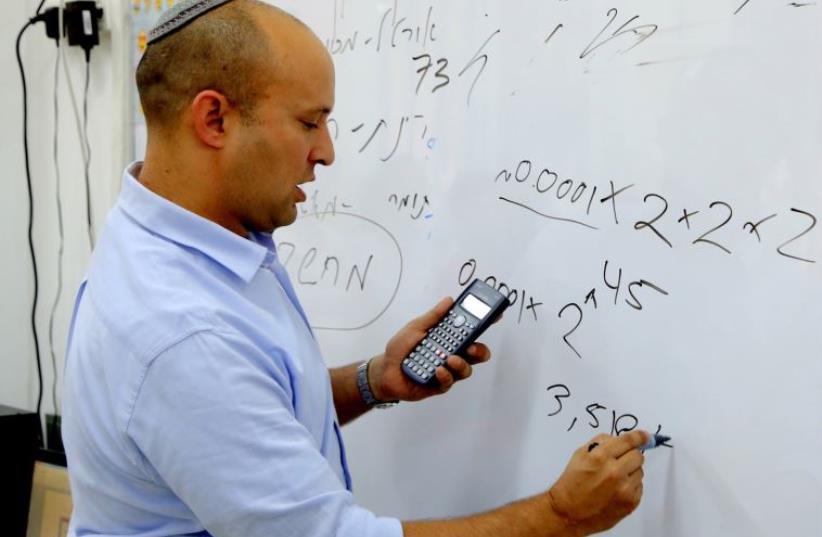 Education Minister Naftali Bennett teaching math to students in Petah Tikva, May 28.
(photo credit: COURTESY EDUCATION MINISTRY)
Advertisement
In the wake of the government decision to repeal a law requiring haredi elementary schools to teach core curriculum subjects, a group of haredi parents has initiated an online petition calling on Education Minister Naftali Bennett to establish haredi schools that will teach such subjects alongside religious studies.The decision to annul the law was widely criticized by opposition parties, especially Yesh Atid, which had introduced and insisted on the passage of the legislation in the last government, although it was never actually implemented.The initiators of the petition state in their declaration that the are opposed to “coercive” measures to change societal challenges, a reference to the old Yesh Atid law, but added that they were concerned by the lack of options for a general education in the haredi school system.The petition, which has garnered almost 650 signatures in the past three days, makes two specific demands of Bennett and his ministry.First, the petitioners demand that Bennett establish a department that will work toward establishing haredi schools within the existing state haredi school system that teach core curriculum subjects in all major haredi cities.Yesh Atid established a haredi school system to be fully funded by the state, although very few schools joined the network. Creating new haredi schools alongside those that already exist will give haredi parents a chance to give their child a general education if they so wish, the petitioners state.The petitioners argue, however, that without the “coercive” policies of the previous government, parents in the haredi community might be less worried about the impact of sending their children to such schools.The second demand of the petition is that the Education Ministry start actively supporting initiatives and institutions that have already begun to adopt core curriculum studies.“One cannot exaggerate the importance of these demands. This is one of the most critical issues for the future of the State of Israel’s society and economy, and we therefore demand your personal intervention on this topic,” the petitioners wrote to Bennett.Neta Katz, a haredi social activist and one of the people behind the petition, told The Jerusalem Post that there was a large and growing demand from haredi parents to give their children a general education, as well as a religious one.Katz added, however, that schools in the haredi system that try and provide core curriculum studies often face serious opposition from haredi parties in local governments, as well as from community leaders.One new initiative in the haredi community in Jerusalem has been the establishment of an elementary school for girls, located in the Rehavia neighborhood, to provide a high quality education in both religious and general education subjects. The Banot Yerushalayim school was founded in August 2014 and started out with just 12 pupils, but has rapidly increased in size and will start the coming school year with more than 70.“We want these girls to have a strong base of religious studies, including Jewish law and Torah, but to combine that with the life tools they will need in the future,” Batya Malach, founder and principal of the school, told the Post.“We want our girls to be able to create a Jewish home based on Torah and derech eretz [often translated as basic decency], and have the tools to deal with the challenges of modern life in terms of being able to bring in an income and in terms of personal development and achievement,” Malach said. “So these girls need to learn English and science and math at a high level to be able to cope with the our changing world.”Malach added that the best way to advance the goal of bringing a general education into the haredi school system was to encourage grassroots initiatives and sentiment among haredi families and young parents, a sentiment she said is already widespread and growing.One initiative that has sought to encourage and consolidate this goal is the Israeli Haredim online community, based around a Facebook group of that name. It has some 2,000 members and, says founder Yehezkel Rosenblum, a haredi social activist, is creating a dialogue and a space for haredi men and women to discuss these issues.“Israeli Haredim is about creating a community and an identity, and allowing people to express these ideas and not be afraid to say that they want their children to learn the core curriculum studies, that they want haredim to be able to integrate in the workforce, to have pathways within which they can enter the army, and work in the state civil service, and do all these things while remaining haredi,” Rosenblum said.“Education is the most important component of bringing this about, because the information that a child gets in primary school will go with him all his life,” he added. “Children need the right information for the modern world. God put us in this world in the 21st century, and we need to know how to be able to live our lives in these times.”