MK Rachel Azaria: "We must not lose US Jewry, and this proposal is a threat to this support.” 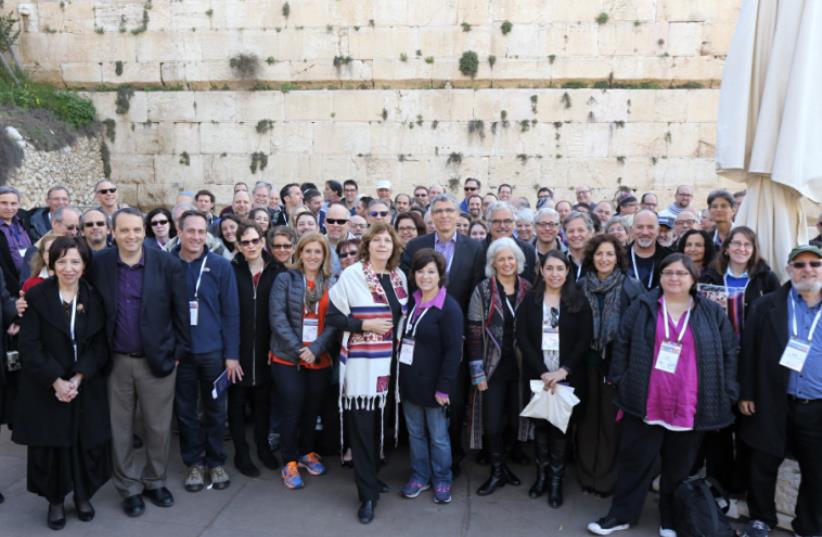 Reform Jews pray at new Western Wall egalitarian section
(photo credit: Y.R)
Advertisement
United Torah Judaism and Shas are advancing a new government resolution to repeal the cabinet decision taken in January 2016 to create a state-recognized egalitarian section at the southern end of the Western Wall.Implementation of the resolution was almost immediately frozen due to a backlash by the online haredi media and the chief rabbis against the deal, which led the haredi parties to step back from the agreement soon after it had been passed in cabinet.First reported by Army Radio, the haredi parties are now demanding that the resolution be repealed outright and what they describe as the “status quo” at the Western Wall be preserved.There would however be some form of recognition that the current prayer space at the Robinson’s Arch area at the southern end of the Western Wall would be designated for egalitarian prayer.But there would be no separate management authority with representatives from the progressive denominations under this plan, and nor would there be access to the egalitarian site from the main Western Wall complex, two critical demands of the non-Orthodox movements and the Women of the Wall group.A senior figure within UTJ confirmed to The Jerusalem Post that the haredi parties were indeed moving ahead with this proposal.Women of the Wall immediately rejected the new haredi proposition, and was sharply critical of Prime Minister Benjamin Netanyahu for failing to implement the original government resolution.“Israel’s prime minister, who encouraged the various parties to reach an agreement, has yet to harness the courage to enforce it,” WOW said in a statement to the press.“Netanyahu now cowardly continues the discrimination and exclusion of women at the Western Wall. In submitting to the will of the haredi parties, the PM is sacrificing women’s rights to pray as they wish, be it egalitarian or traditional prayers.”Kulanu MK Rachel Azaria was also critical of the haredi proposal, saying it would cause severe harm to Israel’s relationship with US Jewry.“This is unbecoming, because such things should not be done to your brothers, and they are our brothers,” averred Azaria.“It will also cause strategic damage to the State of Israel.US Jewry stands up to defend us on campuses and against the Boycott Divestment Sanctions campaign and they are on the front lines of our public diplomacy campaign.“Moreover, it is in the merit of US Jewry and their amazing activities that the US is our ally.That is why [US Ambassador to the UN] Niki Halley defends us in the UN, and why we have secured arms agreements for the most advanced weapons with the US, and why we have a superpower that stands by us. We must not lose US Jewry, and this proposal is a threat to this support.”