The report notes that tolerance and respect towards “the individual other” is expressed in haredi school textbooks. 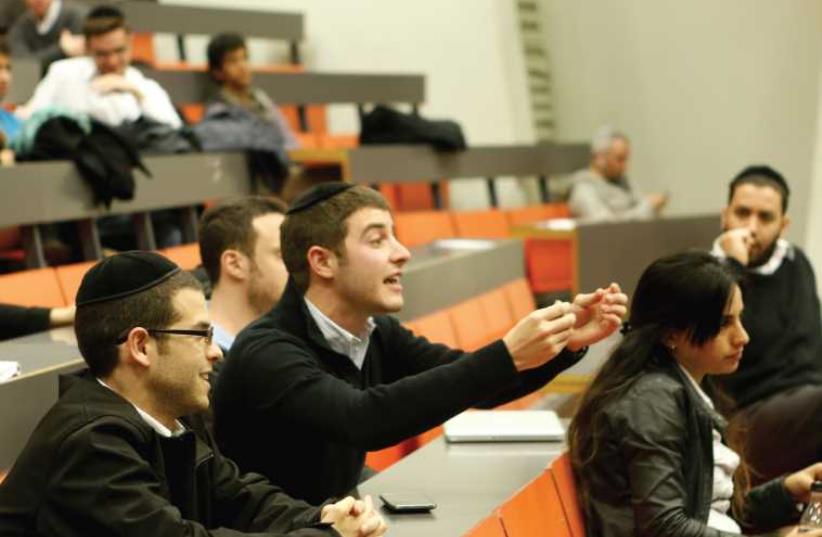 Haredi students in classroom
(photo credit: Courtesy)
Advertisement
A comprehensive study by the education watchdog organization IMPACT-se of textbooks used in haredi (ultra-Orthodox) schools has found that they teach a world view that is isolationist, contemptuous of secular society and instills hatred of Reform Jews.Despite this, the report notes that tolerance and respect toward “the individual other” is expressed in haredi school textbooks, and that respect for the rule of law and a generally pragmatic attitude to the state is encouraged.IMPACT-se examined 93 textbooks used in grades 1 through 12 in the two major educational frameworks in haredi schools, “exempt institutions” and “recognized but unofficial.”The frequently negative attitudes in many of the textbooks toward non-haredi society, gives the perception of danger in, and suspicion of, the outside world.In a comprehension and language textbook featuring wolves and sheep, for instance, a haredi sheep is totally surrounded by hostile Israeli sheep labeled as the media, the Education Ministry, leftists, Meretz, the High Court of Justice and others, while they, in turn, are surrounded by the wolves of Iran, Hezbollah, China, Russia and antisemites, among others.Secularism is also deeply deplored, with secular society described as “empty” and “hollow” in the schoolbooks, with one describing nonreligious society as “stripped bare of ideals and sunk in the depths of materialism.”“Our findings show that the contents of textbooks used throughout the haredi education system promote a unique and separate cultural identity but simultaneously negate other cultures, keeping recognition and contact at a minimum,” the report determined.One subject in the textbooks of especial ire is Reform Judaism, which is blamed for orchestrating the destruction of Judaism while adopting gentile ways.In outlining the Jewish response to the emancipation of Jews in Europe in the 18th and 19th centuries, one textbook described two nonreligious approaches: conversion or Reform Judaism.“Those who followed the second route tried to damage the tree [of authentic Judaism] itself, to corrupt and deform it through changes aimed at turning Judaism into a version of Christianity. These were the Reform Jews,” reads the textbook.Zionism also comes in for heavy criticism, with one haredi schoolbook accusing the Zionist movement of having “jettisoned most of the people’s values and claimed to represent the people... while at the same time the true Jewish people, the people of the Torah, were dispersed and scattered.”In keeping with the modern phenomenon in which the majority of haredi men study in yeshiva, haredi textbooks tend to emphasize the role of women as focused on helping their husbands sustain Torah learning by the wives going out to work.Currently, some 73% of haredi women and approximately 50% of haredi men work.In addition to maintaining the Torah study of their husbands and the broader haredi community, the schoolbooks portray women “as traditional and modest, assuming the husband’s role but remaining in the background.”Despite some concerning content, it is not uncommon for the books to emphasize respect and tolerance for others and contain messages of not judging others and being helpful and kind.Pupils are also encouraged to find ways to work within Israeli society, as long as it doesn’t contradict a haredi lifestyle. In addition, they are taught pragmatic coexistence with the state and wider society and to respect the law and civic system of Israel.In some circumstances, there are also positive depictions of Palestinians. Mizrahi Jews are depicted as friendly and honest, although with certain stereotypes, while pacifism and nonviolence are heavily emphasized.IMPACT-se CEO Marcus Sheff said that such attempts to show respect for others in haredi textbooks were commendable, but noted that the antiquated approach means that haredi children would not have the language or tools to deal with the modern world.In general, the report found that haredi textbooks “clearly fail” international requirements for school curricula to use unbiased information.Educational materials are not “up-to-date, accurate, complete, balanced and unprejudiced,” and do not “use equal standards to promote mutual knowledge and understanding between different peoples,” the study found.“This community can preserve its unique tradition while using more reasonable language toward its ideological foes,” it said. “The educational system does not need to be a zero-sum equation. To criticize nationalism and consumer society is a democratic right, but ignoring the ‘Other’ and ranting are perhaps not the best strategy. Change should be embraced.”