The officer was going to pay respects to a family in mourning when attacked. 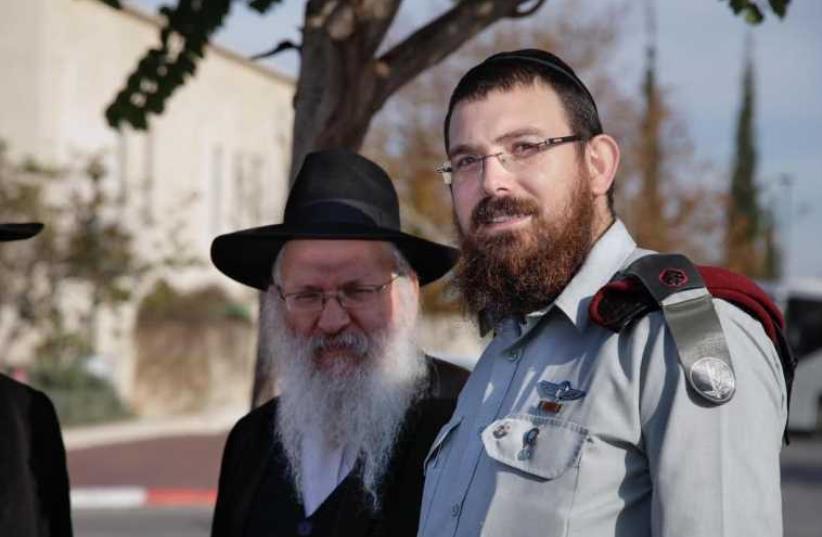 IDF officer Maj. Shraga Dahan
(photo credit: SHIRA KLEIN)
Advertisement
An IDF officer was attacked by ultra-Orthodox extremists on Monday evening while paying a shiva call at a home in a haredi Beit Shemesh neighborhood.Maj. Shraga Dahan, a military chaplain and hassidic Jew, was in the insular neighborhood of Ramat Beit Shemesh Bet with another rabbi to pay their respects to a family in mourning when they were attacked by members of an extremist sect known as the Sicarii. Dahan and the rabbi were both verbally and physically abused, with their attackers spitting and throwing garbage at them and calling them Nazis.Dahan, a French immigrant, is the rabbi of the Tel Hashomer military base, one of the country’s largest.Ultra-Orthodox residents of the neighborhood came to the pair’s defense, helping them escape and hurling invective at the attackers, one witness to the attack told The Jerusalem Post."The IDF views with severity, denounces and condemns any attempt to harm its commanders and soldiers. The Rabbi is proud of his military service and of wearing his uniform,” the IDF said in a statement Wednesday evening.A similar incident occurred on Holocaust Remembrance Day, when protesters from Ramat Beit Shemesh Bet entered a nearby moderate haredi neighborhood and screamed Nazi at a haredi soldier, like Dahan a member of the Chabad movement, walking nearby. In response, national-religious and secular city residents held a Yom Hazikaron memorial ceremony at the entrance to Bet, prompting further confrontations. During last summer’s Gaza war, a reservist in uniform visiting Bet was physically assaulted.Posters and stickers portraying ultra-Orthodox soldiers as pigs in uniform can be seen throughout the city. The posters also refer to these soldiers by the derogatory Hebrew acronym “hardakim” meaning weak-minded haredi, which is an amalgam of the words haredi and harakim, or insects.The problem has been severe enough in several neighborhoods that the army decided last May to allow haredi soldiers to travel home sans their uniforms. And while in some parts of the city soldiers in uniform are a common site, one resident told the Post that she had seen soldiers waiting for buses near haredi neighborhoods being verbally abused by passersby.English-speaking residents of the town took to Facebook to complain and discuss ways in which to combat the phenomenon.“It’s old news. Happens every week,” one American immigrant complained. “Need to go stand [in their neighborhood] on Friday morning by where this cult lives with our soldiers and piss them off, [a protest] anywhere but in their area is a waste of everyones time.”“These events need to be publicized to [brethren abroad], who continue to stream money to these corrupt communities every day in their shuls and at their front doors,” another suggested.In a letter to supporters on Tuesday, local resident and former MK Dov Lipman wrote he and others are planning what he called “a non-political unity rally” against the extremists."We, in Bet Shemesh, have had enough. Extremism is one thing. Mistreating those risking their lives to defend you is another. We are in contact with the police to arrange a massive demonstration - at the spot where this soldier was attacked in the extremist neighborhood - and will call on citizens and leaders from around Israel to join us," Lipman told the Post Asked about the incident, Beit Shemesh’s haredi Mayor Moshe Abutbul told that Post that his administration "strongly condemn[s] all acts of violence against people. [This] is not the way of the Torah and the rabbis [are] against it."