Haredim ramp up attacks on police in Mea She’arim

Over the past four years, extremists have been waging a campaign of incitement against ultra-Orthodox men enlisting in the IDF in order to delegitimize and halt the growing number of such enlistees. 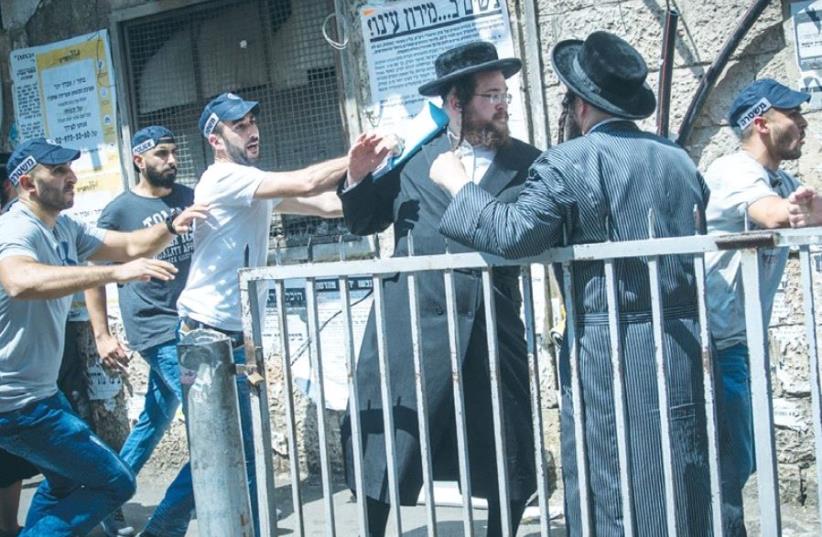 ULTRA-ORTHODOX MEN clash with police in the capital’s Mea She’arim neighborhood yesterday.
(photo credit: YONATAN SINDEL/FLASH 90)
Advertisement
The haredi Mea She’arim neighborhood in Jerusalem was the scene of violence once again Sunday after security forces entered the area to collect evidence from riots that took place there over the weekend.Large numbers of local residents congregated in an attempt to prevent police from gathering security camera footage and other evidence, throwing stones and other heavy items, one of which struck a policeman on the head and wounded him. Rioters burned trash receptacles, blocked roads and denounced the police as “Nazis.”Police in recent days and weeks have stepped up efforts to arrest rioters and extremists who attack IDF and security forces walking through ultra-Orthodox neighborhoods in Jerusalem and Beit Shemesh.On Friday, security personnel conducted the latest of several undercover operations in which policemen dressed as haredi soldiers entered Mea She’arim to attract protesters and arrest them. A crowd of extremist haredi rioters attacked the undercover officers, one of whom was wounded and hospitalized.Uniformed police and Border Police swiftly intervened, arresting 12 rioters in the act of attacking undercover personnel but were then faced with an even larger group of rioters who surrounded them, throwing stones and other items.Another four rioters were arrested, including a minor. The rest were dispersed by police and Border Police. Two other policemen were also wounded.The goal of the undercover operations, according to Israel Police, was to tackle the phenomenon of haredi extremists in radical neighborhoods attacking haredi soldiers, which has spiked in recent months.Calls have been growing to deal with the extremist lawbreakers because of the national importance the government has placed on increasing enlistment from within the mainstream haredi community.
Haredi extremists protest against the drafting of Orthodox men into the IDF
Over the past four years, extremists have been waging a campaign of incitement against ultra-Orthodox men enlisting in the IDF in order to delegitimize and halt the growing number of such enlistees.Police said on Sunday the undercover operations would continue as long as necessary.“The Israel Police will act with a forceful hand against anyone who attacks security personnel and against those who attack the police while carrying out operational duties,” it said in a statement to the press.Also on Sunday, a haredi extremist, age 40, was arrested in Jerusalem for his involvement in the recent incitement and threats against the head of the IDF Manpower Directorate, Brig.-Gen. Moti Almoz.Last month, haredi extremists demonstrated outside his private home in Moshav Kfar Tavor in the Lower Galilee and distributed inflammatory flyers comparing Almoz to Hitler and IDF service to Auschwitz.The flyer read: “Moti Almoz, head of the Manpower Directorate, who sells his soul for money: How long will you burn the souls of the sons and daughters of Israel in the crematorium of Auschwitz – the army of destruction? Know that there is justice and there is a Judge. Your end will be bitter like Hitler and his friends.”