2nd-century fortress was built by a brother of Judah Maccabee, leader of Jewish revolt against the Seleucids, which is celebrated on Hanukkah. 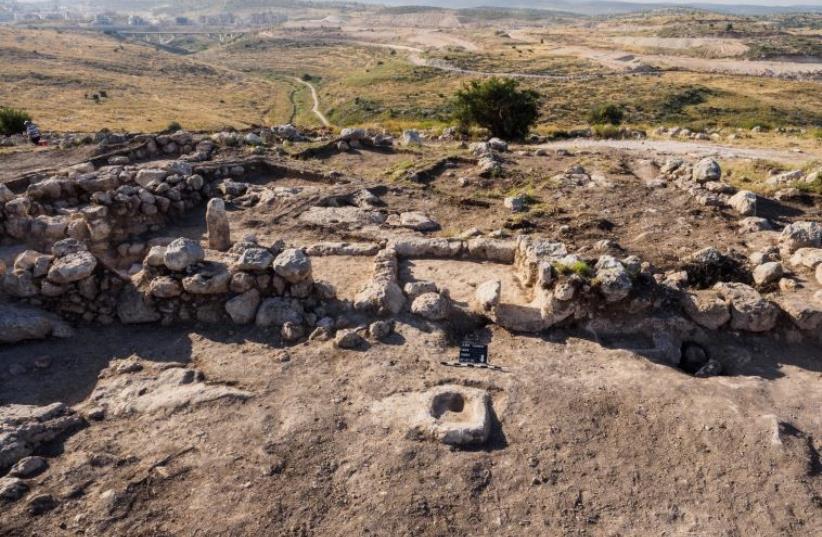 Aerial view of the Hasmonean estate house near Modi'in.
(photo credit: ANTIQUITIES AUTHORITY)
Advertisement
A unique fortress built by the Hasmonean Dynasty (2nd century BCE) and other remains from the same period are suffering from robbery and neglect, according to Bar-Ilan University archaeologist Dvir Raviv.As reported by the Hebrew website Ynet on Friday, the sites are located in the West Bank, not far from Beit El. They are in Samaria but in Area B, which falls under the civil administration of the Palestinian Authority. This includes supervision over archaeological sites.“Since the site was discovered, it has been suffering from antique robbery,” Raviv told Ynet. “This is a very isolated spot in Area B, and the scope of the Israeli authorities’ law enforcement is limited.”The fortress was uncovered by chance a few years ago by Palestinian farmers working in the fields with their tractors.Raviv was alerted and examined the area shortly thereafter.“It was amazing – the pinnacle of my career,” he said. “When I realized there was a Hasmonean fortress, it was an amazing feeling. No one had noticed what was here – and within a moment, what was just another hill became part of our heritage.”According Raviv, the area was part of an agricultural settlement dating back to the beginning of the Second Temple period, or even the Persian period (between the 6th and the 5th centuries BCE).The fortress was built in the 2nd century by Simon Ben Matityahu, one of the brothers of Judah Maccabee, the leader of the Jewish revolt against the Seleucids, which is celebrated on Hanukkah. His kingdom reigned during the brief period of Jewish independence between Greek and Roman rule.Impressive fragments of the ancient walls, as well as remains of warehouses, burials and wells, are visible at the site and inside the numerous caves there.However, it has not been possible to conduct excavations, and Raviv is worried that when a solution is found, it will be too late.Speaking to Ynet, he said the first time he visited the site, the remains of a water cistern included seven well-preserved steps, while the walls of the structure were still plastered. Now the steps are broken and the plaster has holes and marks everywhere, he said.“As soon as Palestinian residents of the area identified the archaeological site, they began to systematically search and dig ancient coins from the Second Temple period, which have tremendous value in the black market,” Raviv said, adding that Hasmonean-era coins and artifacts are very popular among wealthy Jewish and American antique dealers and collectors.Their value could reach thousands of shekels, he said.Raviv expressed hope that in the future the area could be excavated to reveal the treasures that are still underground.Speaking to Ynet, Samaria Tour and Study Center Yair Almakase director said it could be enough to define the site as one of Jewish heritage and establish cooperation between the Israeli and the Palestinian authorities.At the moment, the area can be visited in coordination with the IDF, Archaeological Unit sources told Ynet.