Brig.- Gen. Munir Amar, the late head of the Civil Administration for Judea and Samaria, was killed on Friday in a light plane crash in the North. 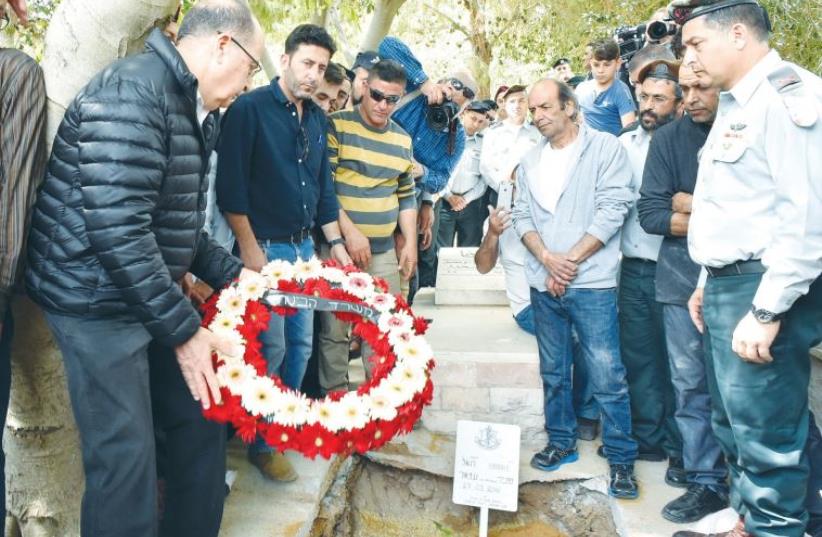 DEFENSE MINISTER Moshe Ya’alon lays a wreath on Brig.-Gen. Munir Amar’s grave in Julis as others look on
(photo credit: ARIEL HERMONI / DEFENSE MINISTRY)
Advertisement
Military and political leaders eulogized on Sunday Brig.- Gen. Munir Amar, the late head of the Civil Administration for Judea and Samaria, who was killed on Friday in a light plane crash in the North.During a funeral service in his home village of Julis, Defense Minister Moshe Ya’alon said that “specifically at this time, Munir’s presence in our lives was so important. His modest yet so very significant character should serve as a moral compass for us, and to shine, for all of us, a light on the route we must walk down.”Ya’alon described that route as one of “tolerance and patience among people, a route of recognition of people for who they are, without distinction of religion, race or sex. A route of uncompromising war against our enemies, but also, an uncompromising war against violence, racism and hatred of the other, merely because he is different. It is a route of determined struggle against harsh words, incitement, and hatred, and one of restraint, moderation and courtesy.”Ya’alon said Munir exemplified the model Israeli “whose roots and feet were planted in this land... Someone who chose to serve his country in places where they take responsibility for complex challenges that reality sets for us – sometimes even to the point of sacrificing one’s life.”“Here, in this spot, and in other cemeteries across Israel, Munir marched, with a heavy and hurting heart, to accompany his comrades in arms who paid the dearest price of them all in defending this land. And just when it seemed that he left the fields of danger, death reached him,” the defense minister said.The coordinator of government activities in the territories, Maj.-Gen. Yoav “Poly” Mordechai, recounted how he stood with Amar at the commander’s swearing-in ceremony two months ago. “You said: ‘Many challenges await us. We will carry out our missions together, while exhibiting responsibility, professionalism and discipline in every act.’ Since that day, we met for evaluations, work meetings, patrols on the ground and more than a few personal meetings, the last of which occurred a few days ago into the small hours of the night.""During our personal meetings you shared with me how you wrestled with command-related and personal issues... on how to manage things professionally and how to operate in gray areas, where every decision has diplomatic and international consequences,” Mordechai said.“It’s been 72 hours and the phone has not stopped ringing. Many people have found themselves hurting and grieving because you are gone – many units in the military, many in government ministries, in the Israeli communities of Judea and Samaria, international officials and Palestinians,” he added.