“Those negotiations led to a true compromise, and to start again and pretend that what has taken place hasn’t happened is naive,” said the rabbi. 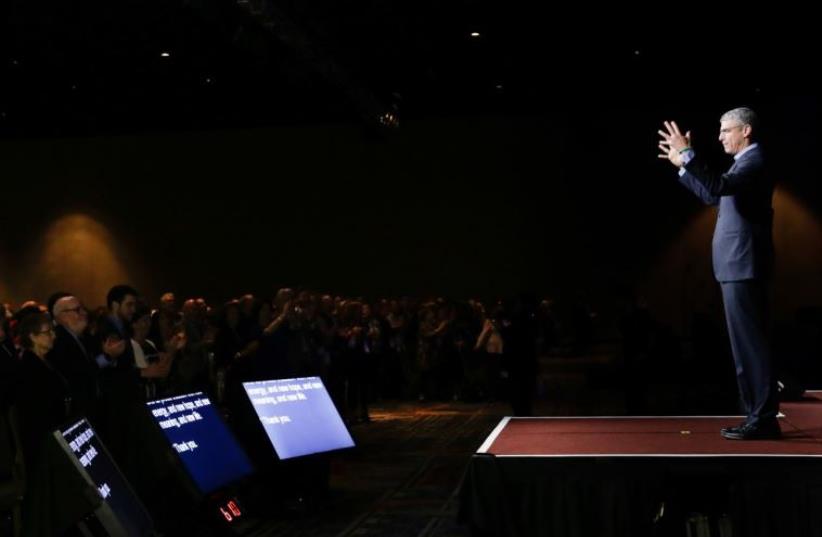 Rabbi Rick Jacobs, president of the Union for Reform Judaism, delivers the keynote address at the URJ biennial convention in Orlando, Florida, November 7
(photo credit: COURTESY URJ)
Advertisement
Rabbi Rick Jacobs, the head of the Reform movement in the US, has rejected an idea proposed by Prime Minister Benjamin Netanyahu to restart negotiations for a new agreement on an egalitarian prayer area at the Western Wall.Jacobs, president of the Union for Reform Judaism, was reacting to statements issued by the Prime Minister’s Office saying that Netanyahu had appointed Regional Cooperation Minister Tzachi Hanegbi and cabinet secretary Tzachi Braverman to begin a new round of talks with the Reform and Conservative movements and the Women of the Wall.“To spend four more years negotiating and then not have that implemented either is not credible,” Jacobs told The Jerusalem Post, referring to the nearly four years of negotiations that led to the original government resolution to create a state-recognized egalitarian prayer site at the southern end of the Western Wall.“Those negotiations led to a true compromise, and to start again and pretend that what has taken place hasn’t happened is naive,” he explained. “It doesn’t feel credible at this moment.”Braverman on Monday issued a terse and angry message to the media, underlining Netanyahu’s instructions to begin upgrading and renovating the physical aspects of the current egalitarian prayer site at the southern end of the Western Wall and begin new negotiations with the progressive movements.“I recommend that anyone who is trying to take advantage of the situation be precise about the details,” sniped Braverman.The global Conservative movement also issued a strong message of condemnation of the government’s actions over the Western Wall and its approval for passage to the Knesset of a conversion bill that would grant the Chief Rabbinate a total monopoly over conversions.“Because we love Israel and see the rising influence of an intolerant religious establishment as an existential threat to its future and to the unity of the Jewish people, we will not rest until these decisions not only are overturned, but also until Israel fulfills the promise of its Zionist origins and founding declaration to ‘ensure complete equality of social and political rights to all its inhabitants irrespective of religion, race or sex’ and to ‘guarantee freedom of religion, conscience, language, education and culture,’” the movement said.