The study was conducted by monitoring the healths of 687 married men who were treated for health ailments at five hospitals in Saudi Arabia and the United Arab Emirates. 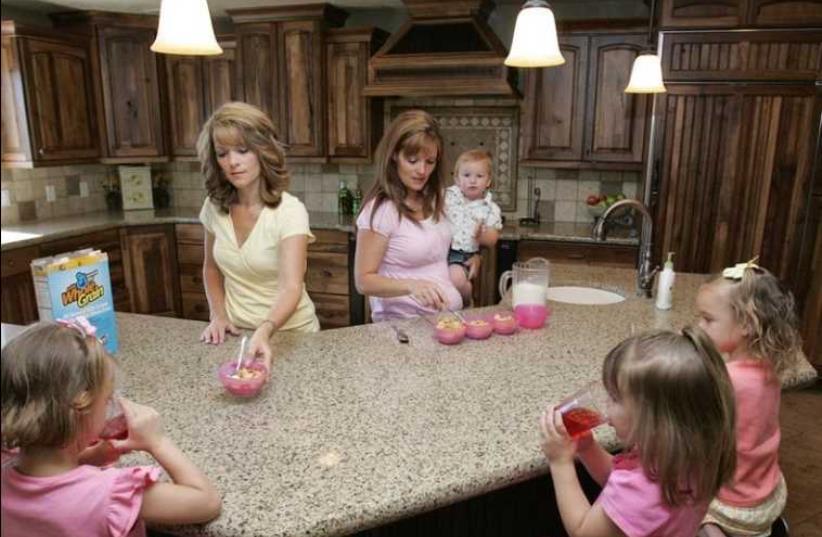 Sister-wives Valerie (L) and Vicki serve breakfast to their children in their polygamous house in Herriman, Utah
(photo credit: REUTERS)
Advertisement
A new study by cardiologists in the Persian Gulf region indicates that polygamy increases the risk of heart disease for men.The results of the study, which were announced at a health conference held over the weekend in Abu Dhabi, said that men who have at least four wives were more vulnerable to cardiovascular defects. "There is evidence that married people have better overall health and longevity but until now no study has assessed the effect of polygamy on cardiovascular health,” said Dr. Amin Daoulah, a cardiologist at the King Faisal Specialist Hospital and Research Center in Jeddah, Saudi Arabia. “Men who practice polygamy have up to four concurrent wives who can reside in the same or different regions but do not normally reside in the same house. Polygamy is practiced mainly in North and West Africa, the Middle East, Central Asia and Southeast Asia."The study was conducted by monitoring the healths of 687 married men who were treated for health ailments at five hospitals in Saudi Arabia and the United Arab Emirates.Of those men studied, 56 percent had diabetes, 57% suffered from high blood pressure, and 45% had a history of coronary artery disease.“There were significant baseline differences according to the number of wives,” the study said. “Men with more than one wife were more likely to be older, live in a rural area, have a higher income and have a history of coronary artery bypass grafting (CABG).”
"We found an association between an increasing number of wives and the severity and number of coronary blockages,” said Daoulah. “This could be because the need to provide and maintain separate households multiplies the financial burden and emotional expense. Each household must be treated fairly and equally, and it seems likely that the stress of doing that for several spouses and possibly several families of children is considerable."Nonetheless, the authors of the study caution that it is premature to state with certainty that polygamy was a root cause of heart disease, since other factors like nutritional habits, levels of intimacy, and the amount of physical exercise done were not taken into account.