Herzog: All remaining Falash Mura in Ethiopia must be brought to Israel

Jewish Agency chairman Isaac Herzog said that Netnayahu’s decision to bring 1,000 of the approximately 8,000 members of the Falash Mura community to Israel was a "step in right direction." 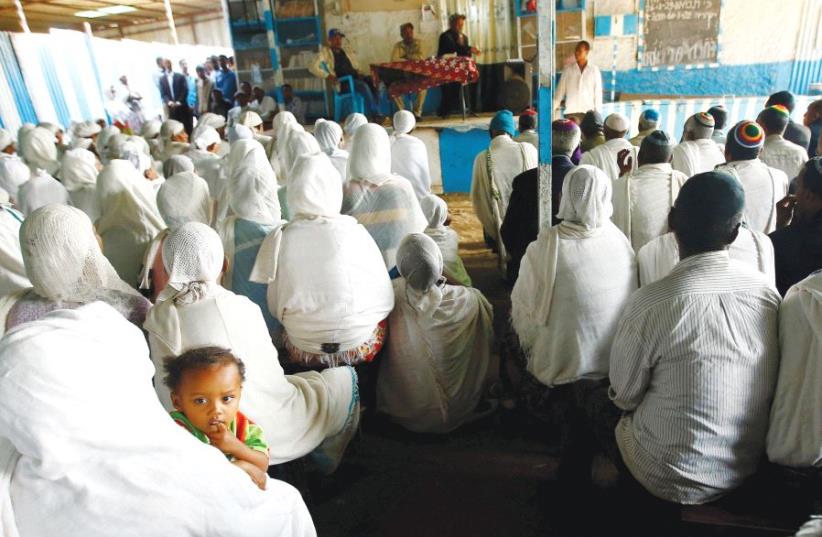 MEMBERS OF the Falash Mura Jewish Ethiopian community attend a prayer service at the HaTikvah Synagogue in Gondar, northern Ethiopia, last September
(photo credit: REUTERS)
Advertisement
Jewish Agency chairman Isaac Herzog said Tuesday that Prime Minister Benjamin Netanyahu’s decision to bring 1,000 of the remaining 8,000 members of the Falash Mura in Ethiopia to Israel was a step in the right direction, but the government should quickly bring all those still left behind.The government has delayed a decision on bringing more of the community to Israel three times this year, most recently in June, citing budgetary and other problems.Activist groups and political supporters of the immigration of the Falash Mura have insisted that all remaining members of the community be brought en masse to end the ongoing issue.“This decision moves in the right direction, but it is necessary to bring the remaining people waiting for aliyah from Ethiopia as soon as possible,” said Herzog in response to Netanyahu’s announcement.“I commend the prime minister for the committee’s decision to bring an additional group of immigrants from Ethiopia. This is indeed a step in the right direction to complete this historical and moral obligation. But it is necessary to commit to bringing the rest of those waiting in the camps in Gondar and Addis Ababa to Israel to enable them to realize the Zionist dream.”Herzog said the “test” of Netanyahu’s announcement would be its “expedient implementation” to bring the entire community of those who are waiting to immigrate to Israel as soon as possible.He added that the Jewish Agency would be ready to absorb them at any time.“There is no reason for suspicion and various excuses to prevent the completion of this process,” he added, noting that all the immigrants would undergo a conversion process during their absorption in Israel as ruled by “my late grandfather Rabbi Isaac Halevi Herzog, and the late Rabbi Ovadia Yosef.”Herzog addressed Jewish Agency employees two weeks ago, and said he would conduct “a very intense public campaign” to bring the remaining Falash Mura to Israel, a change in approach from that of Natan Sharansky who had been more reserved on the issue.Zionist Union MK Shelly Yacimovich, who is strongly supportive of bringing the remaining Falash Mura to Israel, was extremely critical of Netanyahu’s decision and said she did not believe he would fulfill his commitment.She also accused the prime minister of having acted to thwart the immigration of the remaining Falash Mura.Indeed, an investigative report in Maariv in July revealed that an official “in a government ministry” had leaked to the press a distorted and essentially false letter of opposition to the immigration that was written by four Ethiopian rabbis. Two of the four rabbis stated subsequently that the letter had been distorted and did not reflect their views.In 2015, the government passed a resolution to bring all remaining members of the Falash Mura community to Israel, which to date has resulted in the arrival of only the 1,300 Netanyahu mentioned.There are approximately 8,200 members of the Falash Mura community in the Ethiopian cities of Addis Ababa and Gondar who are seeking to immigrate to Israel on the basis of family reunification and of being “descendants of Jews.”Approximately three quarters have parents, children or siblings in Israel and all, according to activists, live as Jews in Addis and Gondar, and are ready to convert once they reach Israel.Critics of Falash Mura immigration, including members of the Beta Israel community who have never converted, argue that they have no real right to immigrate, saying the Falash Mura are not Jewish because their ancestors converted to Christianity.Such critics, including right-wing, conservative national-religious groups, say that allowing continued Falash Mura immigration will lead to an ongoing cycle of family-reunification claims.Activists for the community reject these arguments, however. They say that if all 8,000 people were brought at one time, they would support closing the community centers in Addis Ababa and Gondar and end mass immigration.