The incident took place on Sunday, with the four individuals refusing to visit the grave together with their unit on ideological grounds. 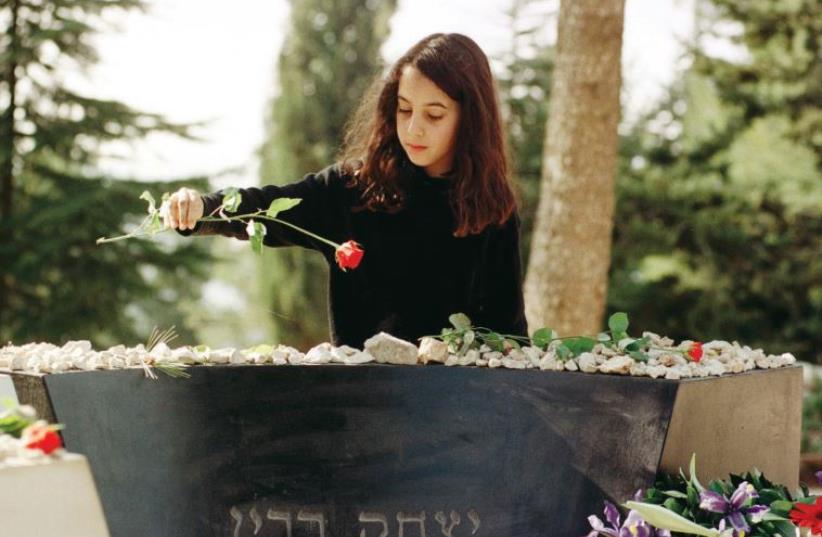 A girl lays a red rose on the grave of slain prime minister Yitzhak Rabin on Jerusalem’s Mount Herzl
(photo credit: REUTERS)
Advertisement
Four religious IDF soldiers who enlisted through the hesder yeshiva framework refused to visit the grave of slain prime minister Yitzhak Rabin on Mount Herzl earlier this week. The incident took place on Sunday, with the four individuals refusing to visit the grave together with their unit for ideological reasons.The soldiers, who are in basic training in the Artillery Corps, were told that they were to face court-martial charges for disobeying orders and so fled their base, but will apparently return on Sunday.The soldiers joined the army through the hesder yeshiva framework, which combines IDF service with yeshiva study for National Religious boys, but they subsequently finished their studies early and began their military service outside of the hesder program.A spokesman for the hesder yeshiva program noted that the four individuals had originally decided not to enlist in the IDF but had done so after their yeshiva encouraged and convinced them to do substantive military service.“The incident is being dealt with great sensitivity by the soldiers’ commanders and other military officials,” said the spokesman.“The army, as the people’s army, includes a variety of opinions and worldviews from Israeli society, and it is appropriate that every request, difficulty and incident be deliberated on.But the accepted command structures [demand] that no soldier act as a law unto himself.”The IDF Spokesperson’s unit said in response that the soldiers’ refusal to visit the grave was not commensurate with the army’s values and would be dealt with by the relevant officials.