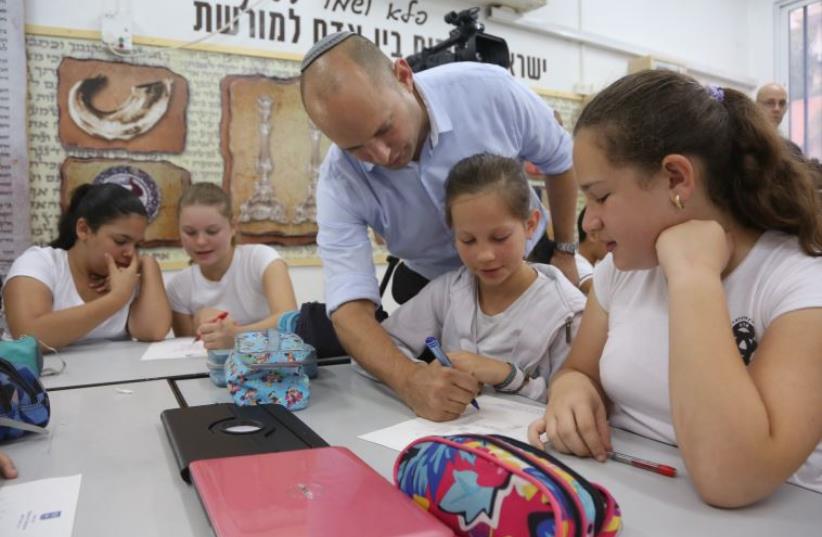 Naftali Bennett teaches math
(photo credit: SASSON TIRAM)
Advertisement
Despite soaring temperatures the past week, high school girls in many institutions were sent home for wearing shorts, sparking nation-wide protests that have gone viral as well as commanding the attention of Knesset members.An online Facebook protest group with the tagline “teaching schools a lesson in equality,” is advertising a demonstration to take place on June 16 outside the Knesset.

The group told stories of high school students from around the country being sent home for wearing shorts in general or wearing those that were above the school-mandated length.It spoke against the reasons given to the girls for sending them home, including statements from principals and teachers such as “there are male teachers in the schools who don’t want to see your beautiful legs.”Eliya Wiseman joined the protest after hearing about the injustice in other schools. Wiseman, a 15-yearold ninth grader in Rosh Ha’ayin, decided to stage a protest at her own school last Friday and wore shorts for the day.Her principal, she said, told her “there is a difference between girls and boys and what is respectable for boys is not respectable for girls.”Wiseman added that her teacher simply wouldn’t discuss the issue with her.In her school the girls are allowed to wear shorts that come to the middle of the thigh, and in theory, she said, the rule is the same for both boys and girls, “but it is only the girls whose shorts are measured.”She said that she is in favor of coming to school dressed respectably, but the rules should be equal for boys and girls.“It’s belittling of the boys,” she added. “It says they can’t control themselves.”The struggle has made its way into the Knesset, where Labor MK Michal Biran brought an urgent motion to the floor Sunday morning.“We must ask ourselves what message we are conveying to young girls? That they should be ashamed of their bodies?” read the motion brought by Biran. “I expect the education minister to intervene and cancel this discriminatory ban. Such a ban only perpetuates the stigma that a woman is an object and should be ashamed of her body under the false pretext of ‘modesty’ and protecting her dignity. This rhetoric is worthy of Iran and not the 2015 Israeli education system.”In response to the protests, the Education Ministry stated that it guides the students and staff to come to school in “appropriate attire” and further related that each school has specific regulations set in cooperation with parents and students and in accordance with the school community.The National Parents Association addressed the issue, stating that it “understands the girls’ protest and supports it. We believe in equality of gender rights and we want accommodate it in every field.”They went on to say they will promote a meeting between the protest organizers and the Education Ministry to facilitate dialogue.“There is room for individual modesty and every institution has dress codes, but on the other hand we want boys and girls to have equal rights and duties,” the statement concluded.