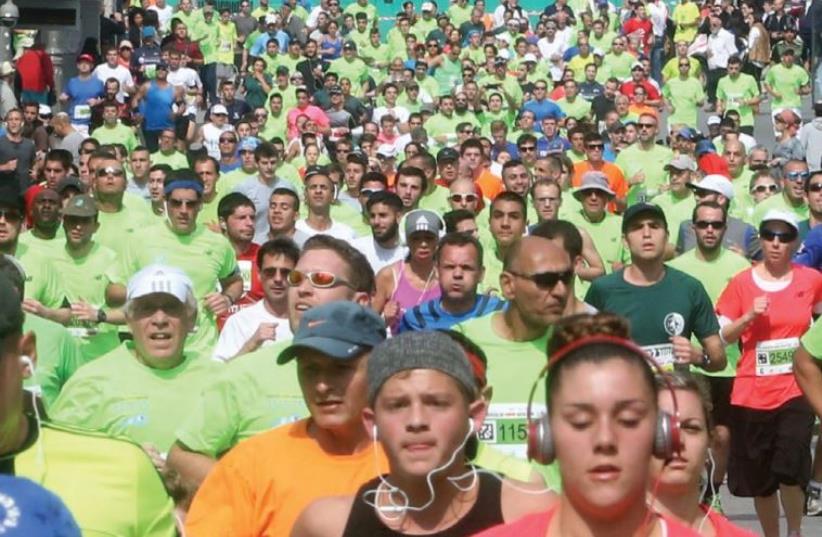 Runners participate in the fifth annual Jerusalem Marathon in 2015
(photo credit: MARC ISRAEL SELLEM)
Advertisement
Over 1,800 Border Police officers and private security personnel will be on hand during Friday morning’s sixth annual International Jerusalem Marathon, which will draw approximately 25,000 registered runners from across the globe, police said on Wednesday.“Heightened security is taking place in the capital, with a number of roads being closed during the early hours of the morning until the conclusion of the race, which will follow the same route as last year,” said police spokesman Micky Rosenfeld.The road closures, delineated on the municipality’s website, will go into effect at 5:30 a.m. and be lifted after the final race concludes shortly before noon, he said. Ben-Zvi Boulevard will be closed to vehicular traffic from Thursday evening at 11 p.m. Other streets closing the day of the event are Ruppin Boulevard, Rabin Boulevard, Chernichovsky, Hapalmah, Hanassi, Keren Hayesod, King George, Jaffa Road, King David, Pierre Koenig and many others.According to Rosenfeld, over 25,000 runners will participate in the various races, as well as thousands of spectators along the route, which will be secured by over 1,000 Border Police and Jerusalem police officers, as well as 800 private security guards.Several police units – including undercover and special-patrol officers – are working closely with the security guards, municipality, and Magen David Adom paramedics to ensure the event remains safe, he noted.“Security measures overseen by police will be carefully implemented throughout the route, with an emphasis on the Old City’s Jaffa Gate and Zion Gate,” Rosenfeld said.“There are no threats whatsoever that police have received,” he continued; “however, we’re not taking any chances, due to other attacks that have taken place in other areas of Jerusalem.”Runners from Israel and dozens of other countries are registered for the event, which will be divided into seven segments: a full marathon (42.195 km.); a half marathon (21.1 km.); a 10,000-meter race; a 5,000- meter race; a 1,700-meter family run; an 800-meter community race; and a 16-km. handcycle race.Along the route, runners will traverse historical sites, including the Knesset, the Old City, Sultan’s Pool, Mishkenot Sha’ananim, Mount Zion, the German Colony, Rehavia, Ammunition Hill, Sacher Park, Mount Scopus and the Mount of Olives.