Hazor is the largest biblical-era site in Israel and a UNESCO Heritage Site. 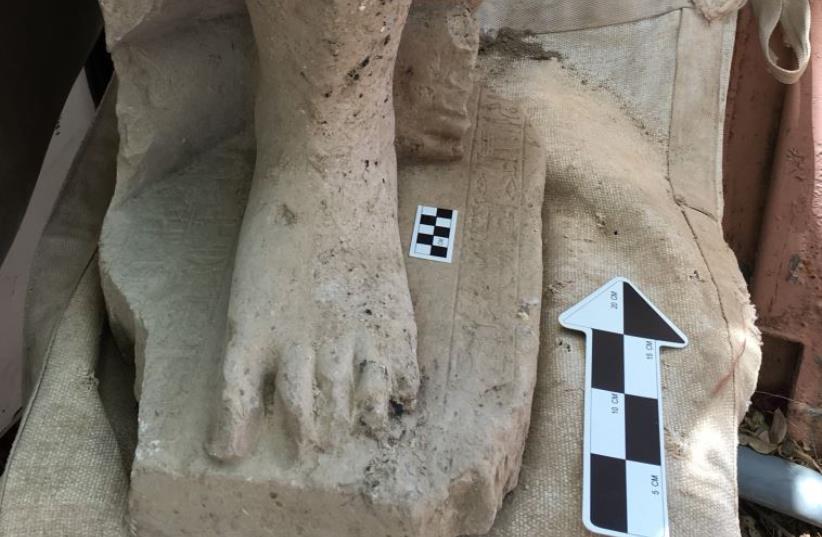 The monumental Egyptian statute of a high official from the Middle Kingdom in Egypt, found in the administrative palace at Hazor, north of the Sea of Galilee in Israel
(photo credit: SHLOMIT BECHAR)
Advertisement
When American Bryan Kovach agreed to volunteer for an excavation north of the Sea of Galilea last week, he had no idea he would personally uncover one of the most historic archeological discoveries in the Middle East.Last Monday morning, during the dig in Tel-Hazor – the largest Biblical-era site in Israel, as well as a UNESCO Heritage Site – Kovach found a large limestone fragment of an Egyptian statue depicting an ancient official’s foot.Only the lower part of the statue, measuring 45cm. by 40cm., survived, representing the crouching foot standing on a square base, in which a few lines in Egyptian hieroglyphic script are inscribed, the Hebrew University of Jerusalem announced on Monday.Kovach, 42, who grew up in Texas, and is presently teaching fourth graders English in Japan, said he came across the relic by happenstance.“It was just lying in the dirt, and looked like something, so I just brushed it off a little bit and thought ‘That looks kind of like a foot,’” he said matter-of-factly by phone on Monday. “And I turned it over, and it was a foot.”Asked what went through his mind upon understanding the significance of his discovery, Kovach, who has volunteered periodically at the excavation site since 1997, said his initial thought was disbelief.“There’s that moment when you just kind of think ‘Oh no, this can’t be,’” he said. “And when I rolled it over and realized that it was an Egyptian statue, I think I told people near me: ‘This is an Egyptian statue.’ It kind of sank in that this was really strange and exciting.”According to Professor Amnon Ben-Tor of HU’s Institute of Archaeology, who has been conducting excavations at Tel-Hazor for over 27 years, Hazor is the most important site from the Biblical period. 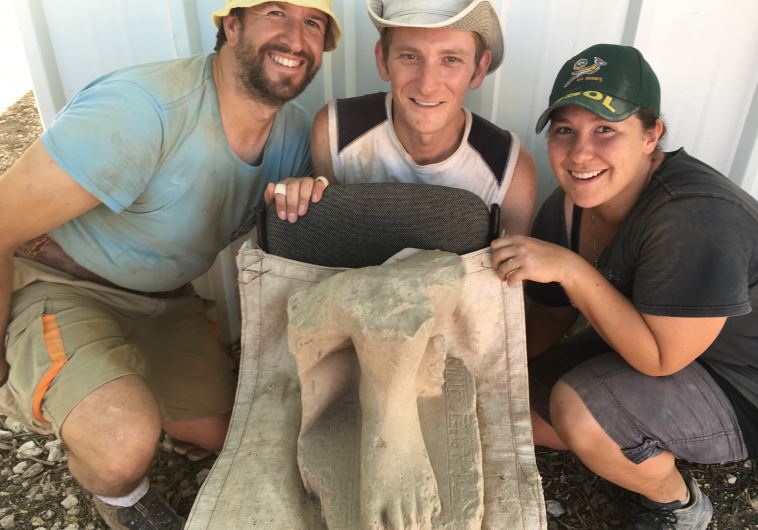 (Courtesy of Shlomit Bechar)
The archaeologist estimates that the complete statue would equal the size of a fully-grown man. Presently, only a preliminary reading of the inscriptions has been attempted, and the title and name of the Egyptian official who originally owned the sculpture are not yet entirely clear.The statue, Ben-Tor said, was originally placed either in the official’s tomb or in a temple – most likely a temple of the Egyptian god Ptah – and most of the texts inscribed on the statue’s base include words of praise to the official who may have served in the region of Memphis, the primary cult center of the god Ptah.They also include the customary Egyptian funerary formula, ensuring eternal supplies of offerings for the statue’s owner.The finding – coupled with a sphinx fragment of the Egyptian king Mycerinus (who ruled Egypt in the 25th century BCE), discovered at the site by the research team three years ago – are the only monumental Egyptian statues found so far in second millennium contexts in the entire Levant.The discovery of these two statues in the same building currently being excavated by the research team indicates the special importance of the building, which was likely the administrative palace of the ruler of the city, as well as that of the entire city of Hazor.Shlomit Bechar, a doctoral student at the Institute of Archaeology, who has been excavating at Hazor for a decade, is the dig’s co-director, and oversees the main excavation area.During the course of nearly 30 years of excavations, fragments of 18 different Egyptian statues – both royal and private – dedicated to Egyptian kings and officials, including two sphinxes, were discovered at Hazor.“Most of these statues were found in layers dated to the Late Bronze Age (15th-13th centuries BCE), corresponding to the New Kingdom in Egypt,” said Ben-Tor.“This is the largest number of Egyptian statues found so far in any site in the Land of Israel, although there is no indication that Hazor was one of the Egyptian strongholds in Southern Canaan, nor of the presence of an Egyptian official at Hazor during the Late Bronze Age.”Ben-Tor added that most Egyptian statues found at Hazor date to Egypt’s “Middle Kingdom” (19th-18th centuries BCE), a time when Hazor did not yet exist.“It thus seems that the statues were sent by an Egyptian king in the ‘New Kingdom’ as official gifts to the king of Hazor, or as dedications to a local temple, regardless of their already being ‘antiques,’” he said.“This is not surprising, considering the special status of the king of Hazor, who was the most important king in Southern Canaan at the time. The extraordinary importance of Hazor in the 15th-13th centuries BCE is indicated also by the Biblical reference to Hazor as ‘the head of all those kingdoms’ (Joshua 11:10).”All the statues at the site were found broken into pieces and scattered over a large area, he noted.“Clear signs of mutilation indicate that most of them were deliberately and violently smashed, most probably in the course of the city’s final conquest and destruction sometime in the 13th century B.C.E,” said Ben-Tor.“The deliberate mutilation of statues of kings and dignitaries accompanying the conquest of towns is a well-known practice in ancient times (I Samuel 5:1-4; Isaiah 11:9), as well as in our time.”The Hazor excavations, which began in the mid-1950s under the direction of the late Professor Yigael Yadin, are carried out on behalf of HU. The excavations resumed in 1990, still on behalf of the university, and the Israel Exploration Society, and are named “The Selz Foundation Hazor Excavations in Memory of Yigael Yadin.”The excavation takes place within the Hazor National Park, in full support and cooperation with the National Parks Authority.The population of Hazor during the second millennium BCE is estimated to have been about 20,000, making it the largest and most important city in the entire region.Its size and strategic location on the route connecting Egypt and Babylon made it “the head of all those kingdoms,” according to the Book of Joshua (Joshua 11:10). Hazor’s conquest by the Israelites resulted in their settlement in Canaan.The city was eventually rebuilt and fortified by King Solomon, and prospered in the days of Ahab and Jeroboam II, until its final destruction by the Assyrians, in 732 BCE.Documents discovered at Hazor, and at sites in Egypt and Iraq, attest that Hazor maintained cultural and trade relations with both Egypt and Babylon. Moreover, artistic artifacts – including those imported to Hazor from near and far – have been unearthed at the site, which remains part of one of Israel’s national parks.In the meantime, Kovach said he will never forget the euphoria accompanying his remarkable discovery.“It’s really wonderful,” he said. “It was an amazing event, and it’s the kind of thing that would make me want to come back and dig some more, and share my experiences to help tell the story of this region.”
Advertisement
Subscribe for our daily newsletter