Commander of training base: We prepare our people for all scenarios. 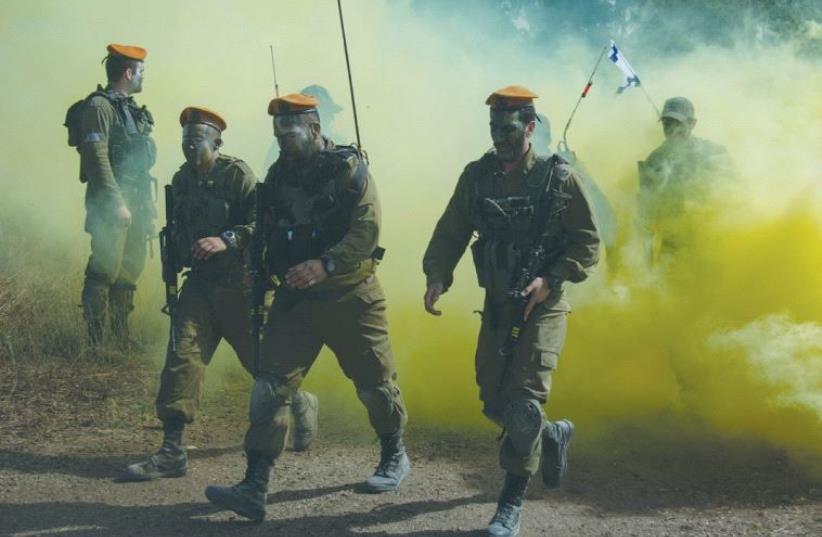 OME FRONT COMMAND soldiers take part in a rescue training exercise.
(photo credit: IDF)
Advertisement
The Home Front Command is training its personnel in new ways that are designed to decentralize units, and give lower-ranking commanders more autonomy in order to deal with the threat of mass projectiles, spread out over a wide area.Lt.-Col. Itay Levi, the battalion commander of the Home Front Command Brigade Training base, told The Jerusalem Post in recent days that in any future conflict, “the home front will turn into the front in many ways,” adding, “We are looking at the threat changing before our eyes.”Responding to the changing reality, Levi, who is in charge of training Home Front Command cadets, said the IDF is building search and rescue teams from the bottom up, creating small response teams that have independent abilities and can move around on their own.Creating independent platoons that can spread out, using efficient command and control systems, would enable the Home Front Command to get to many more rocket strike zones around Israel, Levi said.While the Home Front Command primarily relies on its conscripted brigade, any full-scale conflict would see reservists flooding in, forming the majority of personnel, Levi added.“We are a mixed male and female unit, with a unique make-up of 70% male combat soldiers and 30% female,” Levi said. Home Front Command training programs are packed with three different skill sets: search and rescue, infantry combat abilities, and the dealing with radiological, chemical or biological incidents, in which some teams specialize.The conscripted battalions serve in the West Bank for ten months out of the year. They also carry out security missions on the borders with Egypt and Jordan.“From my perspective as a commander of the training base, the combat soldiers here are the salt of the earth, the best that Israel has to offer,” Levi said. “We have no problems when it comes to recruitment of cadets.”Home Front Command battalions spent some 150 hours dealing with the collapse of a Tel Aviv parking lot last month, pulling out survivors and extracting the bodies of six casualties. Levi said he didn’t know many units that could spend that amount of time on-site working around the clock.Originally designed to deal with civilian rocket strike zones, the Home Front Command’s role is now expanding to be able to rescue military personnel from the site of projectile attacks in enemy territory.“We are not designed to take part in ground offensives, but we have units that we are looking at for the role of providing a response if structures collapse, possibly in enemy territory,” Levi said.“Everyone knows that the chemical threat has decreased,” the training commander said, referring to the Assad regime’s disbandment of its chemical weapons program.“[But] we train our people for all scenarios. Recent events influence our training. We are ready for big or small incidents,” he said.To ensure equality between the sexes, female members of the unit extend their time, meaning that they complete their military service at the same time that their male counterparts do.Recruits arrive “knowing that they will be cared for,” Levi said.“They want to be part of a unit that sees each of its members as a whole world. We have less of a distance between commanders and subordinates here. That kind of distance is unnecessary, and we can dispense with it.”