Last year some 13,000 trucks laden with products from Turkey and Bulgaria passed through Israel, an increase of more than 25%. 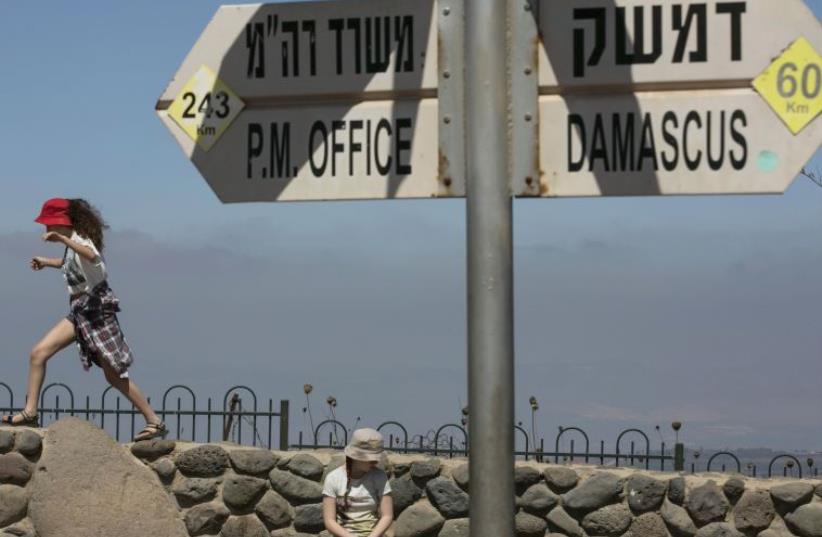 Girls play near a sign at Mount Bental, an observation post on the Israeli side of the Golan Heights, overlooking the Syrian side of the Kuneitra crossing
(photo credit: REUTERS/BAZ RATNER)
Advertisement
Chances are good that if members of the Saudi royal family are eating Turkish dried fruit or wearing Bulgarian shoes, some of those products reached Riyadh stores through Israel.Deputy Regional Cooperation Minister Ayoub Kara (Likud) on Sunday went to the Nahar Hayarden/Jordan River (Sheikh Hussein) border crossing near Beit She’an to look at preparations there for expanding the freight terminal to allow the handling of another 150 trucks a month.According to Kara’s ministry, because of the civil war in Syria, Israel has in recent years become the main land bridge between some European and Arab countries.For instance, Turkey and Bulgaria, which used to ship products to Iraq, Jordan and the Persian Gulf by driving trucks overland through Syria, now either put trucks on ferries, or load containers, that are shipped to Haifa, and then from there driven overland to the Nahar Hayarden bridge and into Jordan. The goods then either remain in Jordan or are shipped from there to points further east and south.Last year some 13,000 trucks laden with products from Turkey and Bulgaria passed through Israel, an increase of more than 25 percent over the 10,300 trucks that passed through the country to Jordan in 2014.An additional shipping line is to be added next month between Turkey and Israel, which, according to Kara’s office, will add another 150 trucks a month.Israel collects duties on each truck that enters and exits the country.“The Nahar Hayarden crossing is important for international trade and links the west with the east,” Kara said.“I believe that widening the freight crossing will contribute a great deal to strengthening relations between Israel and its neighbors, including Turkey, and also with more distant Arab countries.”Another commonly used shipping route is from Europe to Egypt, then overland to Aqaba, and then further onward. That route, however, is more expensive.The Turkey-Israel-Jordan route has grown more popular, even as relations between Jerusalem and Ankara nosedived following the 2010 Mavi Marmara raid, with the initiative to find an alternate route to the Syrian route coming from private Turkish businesspeople.Rafi Shamir, a spokesman in the Regional Cooperation Ministry, said that while the government of Recep Tayyip Erdogan did not promote this route, it also did nothing to stop it.While the place of origin of the goods is documented, when the trucks pass over to Jordan, their transit route through Israel is not noted, allowing the final destination countries to either ignore the fact that the goods passed through Israel, or claim they never knew.Shamir said this route is significant for a number of reasons.First, because it adds considerable sums to the country’s coffers. And second, because it shows both European and Arab countries that Israel is the best and most secure route to transit goods.“Let’s say that tomorrow the war in Syria ends,” Shamir said.“The last few years will give exporters a reason to continue to work through Israel, because they know it is a route that is secure and works well.”