Over a week ago, Military Police arrested a soldier seen firing a shot to the head of an already wounded Palestinian terrorist, as he lay on his back in a Hebron street. 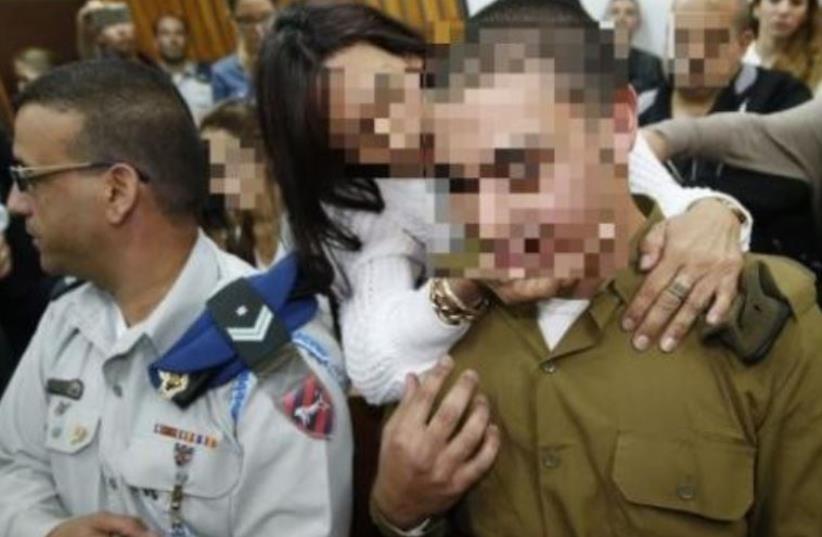 IDF sodlier who shot a neutralized Palestinian terrorist in Hebron in court, March 29, 2016
(photo credit: AVSHALOM SASSONI)
Advertisement
France should bring forth "war crime" charges against the IDF soldier who shot and killed a "neutralized" Palestinian terrorist if the Israeli judicial system fails to convict him, numerous human rights organizations said Wednesday.Foreign media sources revealed this week that the soldier in question is a dual Israeli-French citizen and is therefore subject to the legal clause of universal jurisdiction.

As a result, France has the authority to prosecute the soldier, only known as 'A.' due to a military gag order, regardless of the fact that the alleged crime took place on foreign soil, according to Newsweek.Over a week ago, Military Police arrested the soldier who was seen firing a shot to the head of an already wounded Palestinian terrorist, as he lay on his back in a Hebron street, near the Jewish Tel Rumeida neighborhood.The incident occurred after the Palestinian and an accomplice had attacked another soldier with knives, and then was wounded.A volunteer for the NGO B’Tselem who lives near the scene of the incident filmed the shooting from the window of his home. It was posted online and immediately went viral, fueling condemnations from the left and right.On Thursday, IDF Prosecutor Lt.-Col. Edoram Rigler announced the charge against him would be reduced from murder to manslaughter.
While speaking to Newsweek later Thursday, Human Rights Watch Director for Israel and Palestine Sari Bashi stated: “We hope that Israel will take appropriate measures. But if it doesn’t, the international community should hold it accountable, including the possibility of France prosecuting the soldier, who reportedly has French citizenship, under universal jurisdiction procedures.”
Jacob Burns, Amnesty International’s researcher for Israel and the Palestinian territories, also called for France to prosecute the soldier for "war crimes," saying that the principle of universal jurisdiction was applicable to the case.“Our universal position that all states should prosecute those responsible for war crimes in universal jurisdiction would also cover France here,” he said.The International Criminal Court can also take up the case if the Israeli military court fails to convict the soldier, most likely as a result of Palestinians action. Tovah Lazaroff, Herb Kenion, Yonah Jeremy Bob and Yaakov Lappin contributed to this article.