Amid markedly heightened security, a cross-section of gay rights supporters expressed their hope that the lessons of the tragedy had been learned. 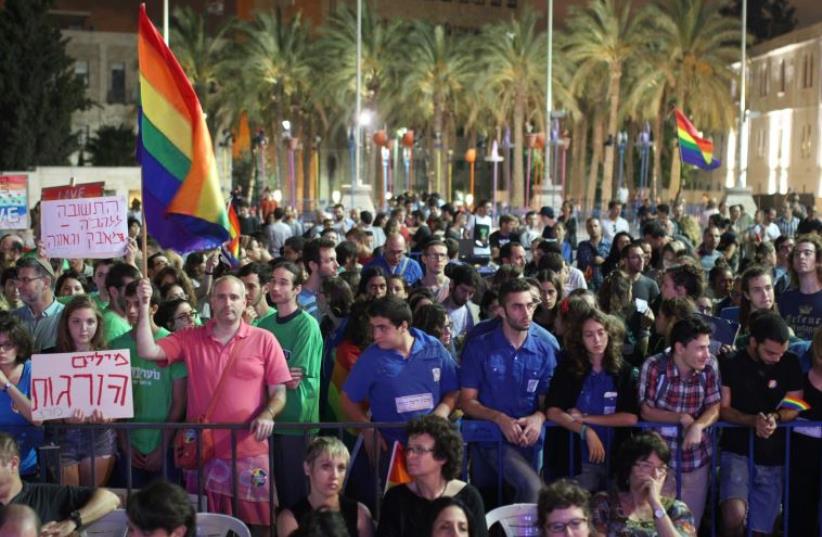 Hundreds attend a pro-gay rights rally in Jerusalem
(photo credit: KOBI SCHUTZ)
Advertisement
One month after a religious zealot stabbed to death Shira Banki and seriously wounded five others at Jerusalem’s annual Gay Pride Parade, hundreds gathered in Safra Square to call for greater tolerance of the capital’s marginalized LGBT community.Amid markedly heightened security, a cross-section of gay rights supporters expressed their hope that the lessons of the tragedy had been learned.Holding a sign saying “Love is Love,” David Yogev of Kibbutz Tzuba joined his wife, Yonit, at the rally to support their 23-year-old gay daughter, whom they accompanied at the parade.“We were walking together and our daughter was holding a sign like this,” said Yonit, pointing to her husband’s rainbow- imbued placard.“We’re here because we are proud of all our children and we believe that people should live in security and freedom, and love who they want – not just in Tel Aviv, but in Jerusalem. Jerusalem belongs to all of its citizens.”“We don’t want people to forget,” added David, with tears in his eyes. “We want to keep it on the agenda.”Although both parents conceded that the stabbing would not likely engender greater tolerance in the city, they said they would not lose their resolve.“We have to try what we can anyway,” said David. “We can’t lose hope.”Gal Fishbein, a bisexual 17-year-old, said the rally was a necessary byproduct of the attack.“I think it’s important to support acceptance and tolerance and love after such a terrible tragedy,” she said. “It’s just common sense.”Deeming Jerusalem a microcosm of Israeli society, Shira Katz Vinkler, CEO of the civil society NGO Yerushalmit Movement, said that positive changes must begin in the capital.“Everything that happens in Jerusalem happens years later in other parts of the country, and we want to share space here for all sectors of society – ultra-Orthodox, secular and Arab – in order to change the discourse in Jerusalem,” she said.Ariel Cohen, 29, echoed Katz Vinkler’s sentiments.“For decades, and especially the last few years, Jerusalem has been a mirror for Israeli society,” he said.“We have every group you can think of here, and what happened a month ago presented a big challenge... and most of the politicians are not speaking loud enough about tolerance – not just for the gay community, but all the minorities being oppressed. Nobody wants to talk about it.”Asked what the solution is, Cohen cited educational reform.“It’s all about education, so the government should expand education about minorities and equal rights,” he said.“I want the students to be taught how to be patient and accept other people – not just in the gay community, but the Palestinian community as well.”