"This area should be completely separated from the Arabs, because this is our heart, the center of our lives,” protesters say. 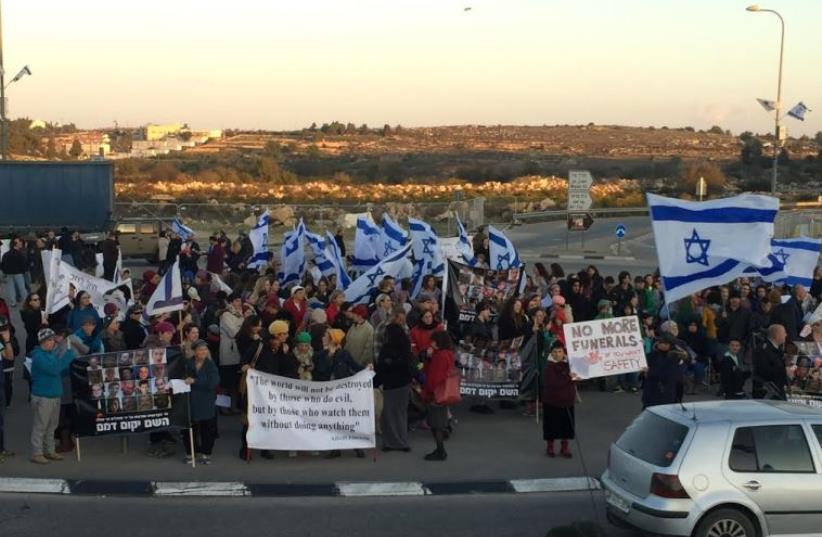 Gush Etzion junction protest against terror.
(photo credit: SETH J. FRANTZMAN)
Advertisement
“In a normal country the good people are free to go where they want and the bad people are behind bars,” exclaimed Yehudit Dasberg at a protest held by hundreds on Monday at the site of a deadly attack a day earlier.The demonstration at the Gush Etzion junction was organized after Hadar Buchris, a 21-year-old student, was stabbed to death at the site on Sunday and four days after three were killed in a shooting attack at nearby Alon Shvut.More than 400 people bused in from Efrat, Migdal Oz and Kfar Etzion, included mothers who demanded better safety measures for their children and an end to terrorism. The demonstration was organized by Rivka Epstein Hattin, an Alon Shvut piano teacher.“We will continue to be in this country, it our right… and not give in,” protester Malcha Puterovsky, said.Gush Etzion Regional Council head Davidi Perl demanded drastic measures to protect Israelis traveling through the junction. “We believe this area should be completely separated from the Arabs, because this is our heart, the center of our lives,” Perl said.New security measures are already taking shape at the junction. Palestinian traffic heading north on the Route 60 has been re-routed via a newly carved road to bypass the intersection. Soldiers have been deployed alongside concrete blocks to defend against attacks.Several Palestinian taxi drivers, stuck in a massive jam created by the protest, chatted with the women.Several speakers said they felt the country had abandoned Gush Etzion. One speaker said the region ought to be made a “part of Israel.”Others demanded outright that the area be annexed as part of Israel, and that all Palestinian traffic on Route 60 be more closely monitored.